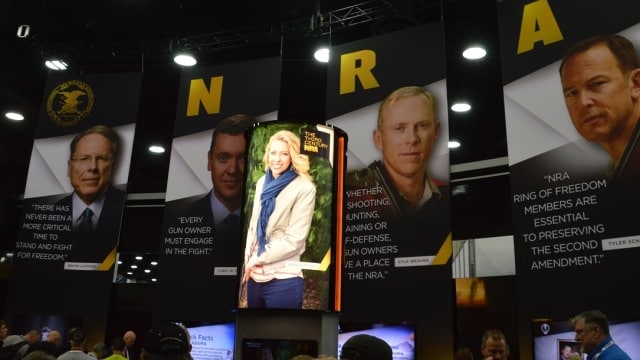 The NRA is endorsing and grading candidates from coast to coast while Everytown only has one name in mind this year. (Photo: Chris Eger/Guns.com)

The National Rifle Association, through its Political Victory Fund, announced the organization’s favorites in races local and national after an in-depth grading process.

In general, the NRA is backing a nationwide Republican ticket, publicly throwing support behind Donald Trump and Mike Pence for President and Vice President, backed with multi-million dollar ad buys.

In U.S. House and Senate races, incumbent Republicans are favored by the group in most states even if they are not stellar on their gun rights credentials. For instance, though U.S. Sen. John McCain carries a “B” rating from the group, he is still favored over “D” rated Democrat challenger Ann Kirkpatrick though not fully endorsed.

In races where staunch Democrats are vying to hold their seats, such as U.S. Reps. John Garamendi and Jared Huffman in California, the group is backing Republicans who are political unknowns, issuing them “AQ” ratings based solely on the challengers’ responses to a questionnaire from the group.

Republican incumbent Sen. Pat Toomey of Pennsylvania has picked up a mild “C” rating from the NRA for his stand on background check legislation, which has earned him $1.1 million in donations from gun control groups and PAC’s backed by former New York Mayor Michael Bloomberg. The Keystone State is also the scene of an attorney general’s race pitting “D” graded Democrat Joshua Shapiro — who like Toomey has benefited from Bloomberg cash — against “A” graded John Rafferty to replace outgoing Attorney General Kathleen Kane who was seen as being rather anti-gun.

There are a smattering of Democrats that have received the nod from the NRA, notably U.S. Rep. Sanford Bishop of Georgia, who carries an “A” rating from the group. In Texas, U.S. Rep. Henry Cuellar is endorsed rather than his Republican opponent. Minnesota‘s Collin Peterson and Tim Walz, Democratic–Farmer–Labor Party members who have represented the state in Congress since 1991 and 2007, also picked up “A’s” and endorsements over AQ-graded GOP challengers.

In governors’ races, the NRA is following the trend of backing Republicans in most cases with a few exceptions. In Missouri, the gun rights group likes Democrat state Attorney General Chris Koster over Republican Eric Greitens to replace the outgoing Gov. Jay Nixon. With New Hampshire‘s Maggie Hassan leaving her desk to run against Kelly Ayotte in the U.S. Senate, the NRA has shied away from outright endorsement of Republican gubernatorial candidate Christopher Sununu, though they have graded him a “B” when compared to Dem Colin Van Ostern’s “F”.

Though a political neophyte, the group has strongly endorsed physician William “Bud” Pierce against Oregon’s Democratic incumbent Gov. Kate Brown who has benefited from Bloomberg funding.

Despite past vetoes on gun rights legislation and promises to repeat the same, Utah Republican Gov. Gary Herbert still carries an endorsement by the NRA.

As for the nation’s largest gun control organization, Everytown has distanced themselves from grading and rating candidates as they have in past election cycles. Though they still maintain their Gun Sense Voter site, the group told Guns.com they only one candidate in mind come November.

“We have only one endorsed candidate this year — Hillary Clinton,” said Erika Soto Lamb, chief communications officer for Everytown, in an email to Guns.com Tuesday.