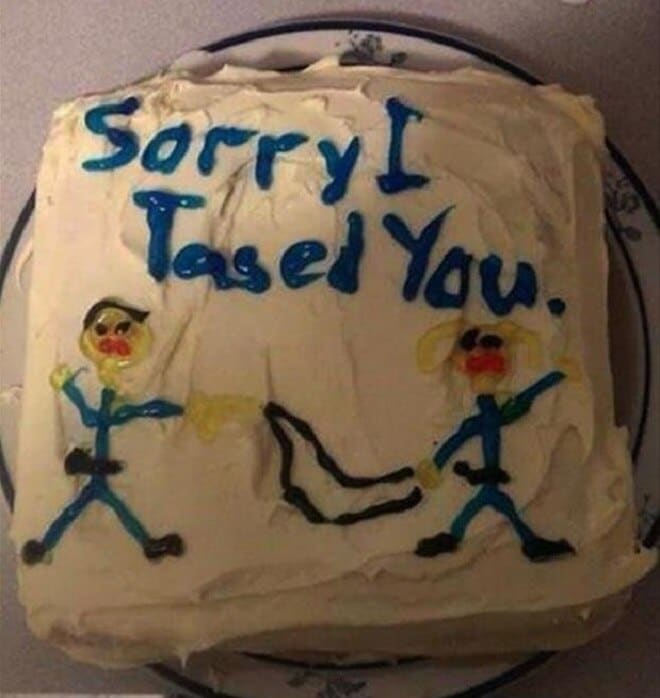 Following a Taser deployment over an iced tea squabble, a Florida deputy sent a picture of a cake as an apology, but he has since been barred from working in law enforcement for a year and is facing a federal lawsuit. (Photo: Pensacola News-Journal)

The Criminal Justice Standards and Training Commission last week placed a former sheriff’s deputy on a one-year probationary period following a taser incident and a texted picture of an apology cake.

According to court documents, Stephanie L. Byron sued former Escambia County Deputy Michael John Wohlers in federal court for violating her Fourth and Fourteenth Amendment rights after he tasered her in her place of employment last June while he was off duty.

Wohlers allegedly tased the woman after she tried to retrieve a drink the deputy had taken from her and refused to give back. The deputy had advised the department that he had accidentally discharged his taser into a pillow and did not properly report the incident with Byron.

In an attempt to smooth things over, Wohlers texted Byron a picture of a sheet cake with a cartoon frosting of a uniformed man tasing a woman with the caption, “Sorry I Tased You” in icing.

The cake did not stop the county’s Criminal Justice Standards and Training Commission from banning Wohlers, who is no longer with Escambia County, from work as a certified police officer in the state for a one-year period, The Pensacola News-Journal reported. An attorney for the former deputy admitted that Wohlers was not engaged in an official or approved activity at the time of the incident.

Byron contends she is permanently scarred and injured from the battery she received and is seeking compensatory damages against both Wohlers and Escambia County Sheriff David Morgan in his official capacity.

In answering the complaint, attorneys for Wohlers contend the woman has already received compensation for her claimed damages from a third party and the former lawman is entitled to “qualified immunity” from civil liability. In the worst case scenario, they argue he was simply negligent and as such did not conspire to violate Byron’s civil rights.

Chief Judge Margaret Catharine “Casey” Rodgers, acting for the U.S. District Court for the Northern District of Florida, sent the case to mediation set to take place next May.