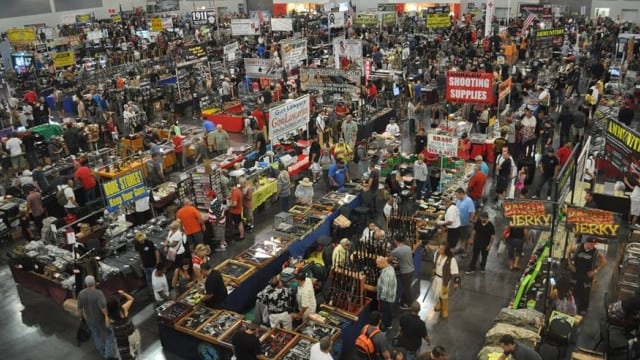 The long-running Crossroads Del Mar Gun Show, near the border with Mexico, typically draws upwards of 10,000 customers, and is one of the largest in the area.

The news of the plate reader use drew quick outrage from gun rights organizations including the Second Amendment Foundation and National Rifle Association who classified the operation as a “civil rights outrage” equating it to illegal snooping without probable cause.

“While the use of license plate readers is a valid law enforcement tool when properly used, this does not appear to be the case in this situation,” said Goodlate in a letter. “When attending a gun show, law abiding citizens are exercising their First Amendment right to peaceably assemble.

“Further, if they are purchasing or otherwise acquiring or possessing a firearm, they are exercising their Second Amendment right to keep and bear arms,” he continued. “These Constitutionally-protected activities should not subject gun show attendees to unwarranted and heavy-handed surveillance practices by their government.”

Calling the activity “troubling,” the lawmaker asked Saldaña to provide context on the operation including the number of gun shows ICE surveilled, if similar operations are ongoing, how many license plates were recorded, if the information has been retained and if the information led to any arrests.

This is not the first time that such an operation was exposed. Last year the American Civil Liberties Union uncovered a secretive program by the U.S. Drug Enforcement Administration to build a massive database of license plates images via reader devices.

As part of this investigation, emails released through the Freedom of Information Act detailed cooperation between the DEA’s National License Plate Recognition initiative and the Bureau of Alcohol, Tobacco, Firearms and Explosives to scan and record the plates and vehicle images of gun show attendees in 2009, though officials said that phase of the operation never left the planning stages.