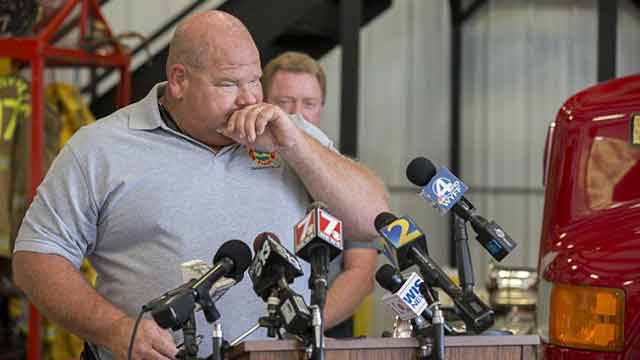 Fire Chief Billy McAdams (pictured) and volunteer firefighter Jamie Brock, who took down the shooter and has not made a public appearance since, were the first ones on the scene after the shooting. (Photo: NBC)

The Anderson County Sheriff’s Office revealed Monday that the volunteer firefighter who tackled the teen shooter at a South Carolina elementary school last week had a handgun, local media reports.

Contrary to initial reports, Townville volunteer firefighter Jamie Brock was armed when he took down the 14-year-old shooter, but it’s unknown if Brock’s pistol was ever unholstered or if others on the scene, including the shooter, knew about the gun.

Brock has not spoken publicly since the shooting and officials who have discussed the incident with the press never mentioned the gun. At a press conference last week, Townville Fire Chief Billy McAdams described the scene.

McAdams said he and Brock were the first two on the scene and split up when they arrived at the school. McAdams, a trained paramedic, went inside the school to tend to wounded victims, while Brock volunteered to engage the shooter. He pinned the teen down until police arrived and arrested him.

For his part, Brock is being hailed a hero for apprehending the suspect and for likely saving lives, but he passed the torch on to others in a statement, which was read by McAdams.

“The true heroes of (the) senseless tragedy are the teachers that put their lives on the line to protect their students, the principal who through fears of her own did what’s right to ensure the safety of the school,” Brock said in his statement. “They deserve to be called heroes, and to them I tip my hat.”

Authorities identified the shooter as 14-year-old Jesse Osborne. He opened fire on the playground as students and staff exited the school for recess. As soon as shots were fired, school staff quickly rounded the kids back into the building.

However, two children and a first-grade teacher were struck by gunfire. The teacher and one of the students were treated and released the same day as the shooting, but 6-year-old Jacob Hall, whose femoral artery was ripped open by one of the bullets, succumbed to his injuries and died over the weekend.

During the investigation, authorities also discovered Osborne’s father, Jefferey, had been fatally shot in their home. Osborne is accused of killing his father before making his way to the school. According to witnesses, the teen repeatedly yelled that he hated his life as he opened fire at the school.

Initial reports noted that Osborne was homeschooled, but further investigation revealed this wasn’t simply an educational choice made by his parents. In fact, Osborne was expelled from school last year after he brought a machete and a hatchet to school following relentless bullying. However, Osborne did not attend the school where the shooting took place and police have not made a connection between Osborne and Townville Elementary.