Shop owner with an AK-47 takes out armed robber 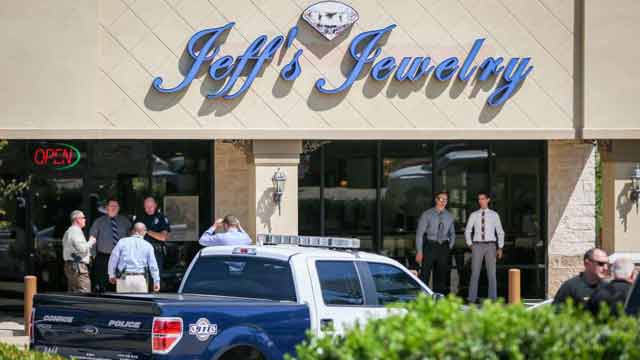 A clerk at a nearby shop said she heard the gunshots but thought it was just a car backfiring until police showed up a short time later. (Photo: Michael Minasi/Houston Chronicle)

An attempted robbery at a Conroe, Texas, jewelry store Monday afternoon was interrupted by the owner, who was armed with an AK-47.

Conroe Police Lt. Dorcy McGinnis said four black males, who were dressed in all black, walked into Jeff’s Jewelry just after noon and demanded jewelry from the shop’s employees, as well as purses, wallets and other valuables from the customers. But before the suspects left the store, they opened fired on the customers and employees. At that point, shop owner, Jeffery TurnerJr., fired with an AK-47. One of the suspects was struck by Turner’s gunfire, while the remaining three took off, the Houston Chronicle reported.

Responding officers found the wounded suspect lying in the doorway of the business. He was pronounced dead at the scene and his identity has not been released at this time. Authorities searched for the remaining three suspects, but only found their abandoned getaway car. McGinnis said the suspects were believed to no longer be in the area.

The shootout left the store filled with shattered glass and, although shaken up over the ordeal, no employees or customers were injured. Witnesses confirmed to police that the suspects shot first before Turner opened fire, and McGinnis noted there was “a lot of gunfire.”

“You always have a right to defend yourself, especially when the robber shoots at you,” said E. Tay Bond, Turner’s attorney.

In November 2014, the store was not even open yet when a group of would-be robbers backed up a van in front of the store and smashed the door with a sledgehammer. Turner said the five suspects stormed through the shattered door, but as soon as an employee pulled out a shotgun, the suspects quickly changed their minds about the score and fled instead.