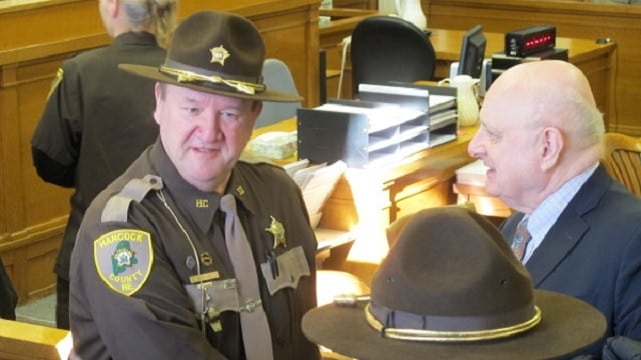 The majority of elected sheriffs in Maine this week announced they are recommending a “no” vote on Question 3 concerning expanding background checks on firearms to include most private transfers.

The voter referendum, financed by over $2 million primarily from New York-based Everytown for Gun Safety and Moms Demand Action, would mandate Brady checks on private gun sales among other tenets. While backers argue Q3 will save lives, the sheriffs say this is misleading.

“The measure will do nothing to stop evil people from getting their hands on guns,” says the open letter posted by Hancock County Sheriff Scott Kane. “In fact all relevant data indicates that criminals acquire firearms through theft and the black market. This initiative will not stop the reoccurring pattern.”

The sheriffs, in their opposition letter, question the need for more gun control in a state that enjoys some of the lowest rates of violent crime in the nation.

In July, 24/7 Wall St. generated an index to rank the peacefulness of each U.S. state by crunching crime, gun ownership and incarceration rates and classed Maine as the most peaceful in the country.

The move by the sheriffs counterbalances the endorsement last month of Q3 issued by the Maine Chiefs of Police Association, led by South Portland Chief Ed Googins, who has long stumped for the measure personally.

“It’s a common sense proposal that will help keep guns out of the hands of dangerous people,” said Googins in a press conference. “Criminal background checks are the single most effective way to prevent felons, domestic abusers, people with severe mental illness and other dangerous people from purchasing a firearm.”

David Farmer with Mainers for Responsible Gun Ownership told Guns.com Thursday the pro-background check group has support from law enforcement around the state.

“Over the course of the next few weeks, we will continue to make our case to voters, including the sheriffs, and hope that they will support Question 3, which would require background checks for all gun sales,” said Farmer in an email.

The split between elected sheriffs and other police lobby groups over anti-gun ballot initiatives is not isolated to Maine.

In Nevada, 16 out of 17 sheriffs came out against Question 1, an Everytown-backed background check expansion with only Joe Lombardo, sheriff of Clark County and head of the Las Vegas Metropolitan Police Department, vowing to remain neutral. Nevadans for Background Checks, the group fronting the ballot initiative, have the support of the Las Vegas lodge of the Fraternal Order of Police and the 1,500 member Nevada Association of Public Safety Officers.

All three measures will be decided Nov. 8.