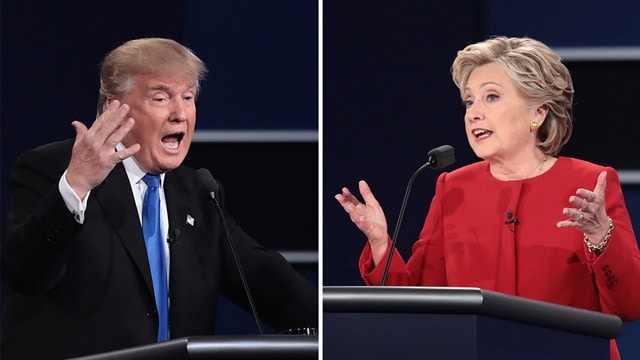 The votes are mounting for moderators to question presidential candidates Donald Trump and Hillary Clinton about where they stand on expanding background check laws during Sunday’s scheduled debate.

Nearly 42,000 people want to know if the candidates “will support requiring criminal background checks for gun sales,” as posed by Richard M., of California, who says his son was murdered by someone “who should have never had a gun.”

“Gaps in our current system make it easy for felons and other dangerous people to buy guns online and at gun shows, no questions asked,” he wrote.

Moderators for the town hall-style debate will take questions both from a live audience and those submitted online through the Open Debate Coalition.

“This election, voters are focused on solutions to the issues that keep them up at night, even if not all the candidates share that focus,” said Dan Gross, president of the Brady Campaign to Prevent Gun Violence, in a statement Tuesday. “And by a 12,000 vote margin, what Americans want to know most is whether the candidates support expanding Brady background checks to keep guns out of the hands of felons, terrorists, and domestic abusers.”

The second-most popular question, with just under 31,500 votes, presses candidates on whether they’d cut or expand Social Security benefits.

Clinton and her running mate, Sen. Tim Kaine, D-VA, pushed a platform of gun control and violence prevention at the Democratic National Convention in July, drawing the ire of the National Rifle Association and other gun rights groups who fear a liberal Supreme Court, as appointed by Clinton, would slowly erode Second Amendment rights.

Clinton also expressed an interest in repealing the 2005 Protection of Lawful Commerce in Arms Act, which protects the gun industry from frivolous lawsuits when their products are used in the commission of a crime.

The NRA dropped another $6.5 million Wednesday on attack ads leveled at the Democratic nominee, alleging she will disarm women fending off violent attackers.

The organization has reportedly spent $17 million promoting Trump over the last five months, though his own track record left many gun rights advocates weary.

Trump, in his book “The America We Deserve” published 16 years ago, expressed support for an assault weapons ban and a 72-hour waiting period on gun sales. The Republican candidate has since distanced himself from those comments by criticizing “gun free zones,” promoting stricter immigration policies as a preventative measure against terrorist attacks and flashing his concealed carry permit at public events. He earned the NRA’s official endorsement in May.

Clinton and her camp say she supports the Second Amendment and scoffs at the notion that she “is coming for people’s guns.”

The second presidential debate is scheduled to begin at 9 p.m. on Sunday, Oct. 9 at the Washington University in St. Louis. To submit questions, click here.