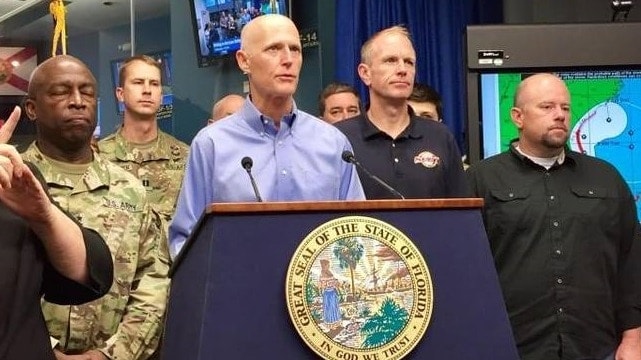 As extremely dangerous Hurricane Matthew barrels down on the Florida coast, some in the state may be able to temporarily carry concealed handguns without a permit under a new law.

The National Hurricane Center as of Thursday morning places the eye of the tropical cyclone about 180 miles Southeast of West Palm Beach Florida moving at 14 mph to the Northwest. Packing Category 4 hurricane strength winds of 140 mph, the storm is expected to move close to or over the east coast of the Florida peninsula through Friday night.

With more than 1.5 million Floridians in evacuation zones, attention by some gun owners concerned with safety is falling on a law signed last year by Gov. Rick Scott to allow law-abiding citizens without concealed carry licenses to bear arms during declared mandatory evacuations.

The measure, which passed as HB209/SB296, creates an exception to Florida’s prohibition against concealed carry of a weapon without a permit by allowing adults not otherwise prohibited from possessing a firearm to temporally do so while evacuating. The law allows for a 48-hour window that this would be allowed after the evacuation has been ordered. However, the governor can authorize an extension as needed.

Further, existing state law does not authorize the seizure, taking, or confiscation of firearms that are lawfully possessed in an emergency, unless a person is engaged in a criminal act.

“When a family is forced to flee for their life in the face of a natural disaster like Hurricane Matthew, with little more than what they can carry with them, the last thing they are worried about is whether they are in technical compliance with concealed weapons law,” said Brandes. “Today responsible gun owners are afforded this flexibility in Florida because we recognize that the first priority is to ensure they safely evacuate when complying with a mandatory evacuation order.”

It should be noted, however, that not all public shelters — for example those in Broward County — allow firearms in their facilities, which are typically at community centers and schools. According to Gov. Scott’s office, there were 3,000 people in 54 public shelters across the state with that number expected to double by the end of Thursday. A full list of shelters can be found here.

Scott has authorized the mobilization of up to 2,500 National Guard members and has another 4,000 on standby. In addition to this, the Florida Department of Law Enforcement, Florida Fish and Wildlife Conservation Commission, Florida Highway Patrol and other state agencies have more than 500 personnel ready to deploy to assist in search and rescue and storm recovery efforts.

He has also requested President Obama to declare a pre-landfall emergency for the state.