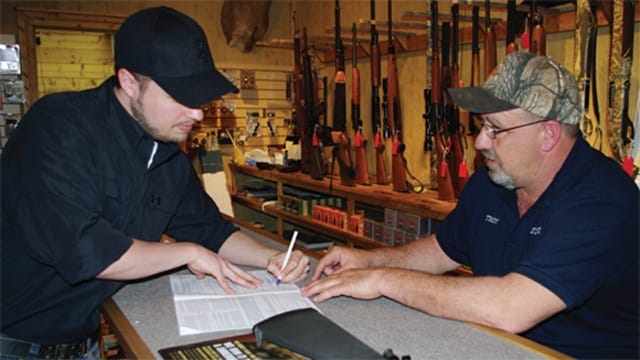 “We have made a concerted effort to make sure to do everything that we could possibly through legislation,” said Jake McGuigan, senior director of government relations for the National Shooting Sports Foundation. “We’ve passed NICS bills in 16 states over the past six years hoping they would comply. Based on this report, we’re not seeing that.”

Since 2011, the campaign championed legislation in more than a dozen states forcing negligent reporters to update the federal background check system with mental health records, among other documentation, necessary for denying a gun sale to a prohibited person.

An internal audit of how the Justice Department handles NICS denials released last week, however, shows those same states still routinely fail to follow the law.

Federal auditors examined 631 transactions across the 13 states operating their own systems and found, for all but one sale, the states “did not fully update the NICS database or inform the FBI of the transaction’s outcome.”

“These incomplete records pose a risk that future firearms may be transferred to prohibited persons because future checks might not identify the information uncovered in prior checks, or do so in a timely fashion,” the audit reads. “Similarly, by not working to ensure that NICS is appropriately updated, the FBI may be preventing itself from properly evaluating and reporting accurate NICS transaction data, and limiting the abilities of stakeholders to make informed operational and budgetary decisions.”

States processed 109 million of the 202.5 million background checks completed between November 1998 and December 2014, according to the audit.

“It’s a little bit scary to see a lot of the disconnect between the courts, state police and various organizations in these states,” he added.

At least one Pennsylvania law enforcement official agrees with McGuigan, but says it’s not a simple process.

“We know it’s a public safety issue and we want to have the information in NICS,” said Major Scott Price, Director of the Bureau of Records and Identification for the Pennsylvania State Police. “It just takes some serious technological adaptation to make it happen.”

Pennsylvania operates its own system, called the Pennsylvania Instant Check System. PICS processed more than 500,000 checks in the first and second quarter of 2016 and has denied about 1 percent of those transactions.

Price said state legislators opted for PICS because it can access more criminal records than the federal system can — an “excuse” McGuigan says misses the bigger picture.

“They may be able to take care of doing background checks in state, but if someone goes to another state, those records are not in the system,” he said. “They are almost not looking at it on the higher level.”

That’s why, Price said, the state used federal grant money awarded through the National Criminal History Improvement Program to streamline its criminal records and minimize reporting discrepancies keeping those documents from populating on the federal system during a background check.

Over the last 20 years, Pennsylvania accepted $21.8 million in NCHIP funding to improve its criminal records reporting — the fourth highest recipient of federal grant money behind California, New York and Texas.

The Fix NICS campaign ranked Pennsylvania number one in 2015 for uploading more than 730,000 mental health records into the federal background check system — 68 percent more entries than the next closest state, New Jersey.

Despite effort from some states, however, the Fix NICS campaign reports in 2015 at least seven states — Rhode Island, Vermont, Oklahoma, Wyoming, Montana, New Hampshire and Alaska — have updated NICS with fewer than 110 mental health records.