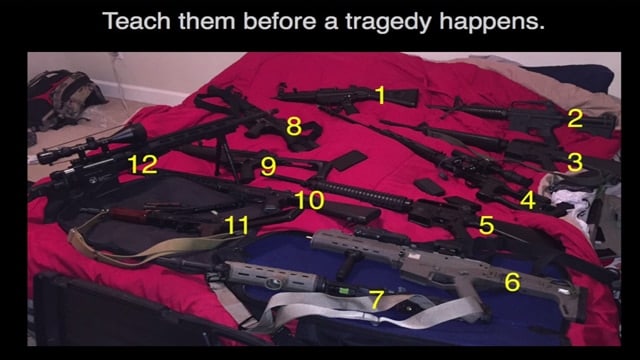 A police department in northern California is challenging residents to distinguish between real firearms and replica guns in a picture posted to its social media channel.

The San Ramon Police Department, located 34 miles east of San Francisco, released a statement on Facebook Wednesday encouraging parents to make sure Airsoft weapons bought for their children can be clearly identified as such before tragedy strikes.

“Also, talk with your children,” the department wrote. “Make sure they fully understand the importance of listening and obeying instructions from an officer should they ever come into contact with the police while playing air-soft alone, or with friends.”

The statement comes after a concerned resident contacted emergency dispatchers Sept. 29 to report a suspicious person dressed in all black, wearing a ski mask and carrying a rifle while prowling around a neighbor’s house.

Officers arrived on the scene to find the suspect hiding in the bushes. He came out unarmed, as instructed, police said.

Police soon determined the 14-year-old suspect was one of five juveniles between the ages of 12 and 14 playing in the neighborhood with Airsoft rifles.

“This is the second incident within the last few weeks where our officers have encountered very realistic looking air-soft guns and it has become very concerning because of how well these air-soft guns replicate actual firearms,” the department wrote. “It is almost impossible to differentiate between some of these air-soft replicas and a real gun without physically holding or inspecting the weapon.”

California enacted a law in January requiring all replicas have fluorescent markings to help law enforcement and others distinguish them from real firearms — this after the 2013 fatal shooting of a 13-year-old carrying a pellet gun police believed to be an AK-47.

On Sept. 14, police officers in Columbus, Ohio, shot and killed 13-year-old Tyree King after the teen pulled a BB gun from his waistband during questioning over a reported armed robbery in the area.

In April, Baltimore police officers shot 14-year-old Dedric Colvin in the shoulder and leg on a street on the eastern side of the city. Colvin was carrying a BB gun officers said resembled a semiautomatic pistol.

And in November 2014, Cleveland police shot and killed 12-year-old Tamir Rice after mistaking his Airsoft replica gun for a pistol.

The Colvin shooting led one Baltimore councilman to introduce a replica gun ban during a Sept. 19 public meeting. City officials 120 miles away in Salisbury announced a potential ban of their own the following week.

For the San Ramon Police Department, however, education remains key to preventing these incidents.

“We must educate as many people as possible on how realistic these airsoft rifles have become before a tragedy takes place,” the department said.