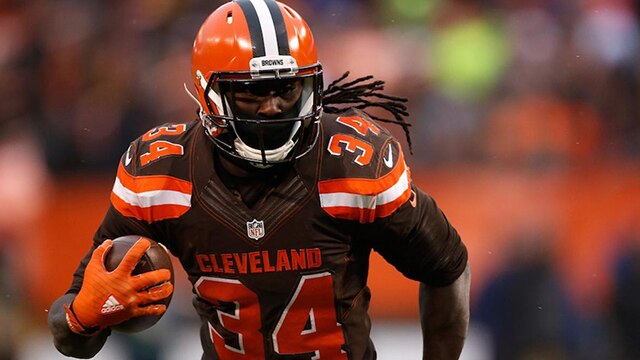 Isaiah Crowell donated his check as part of his apology for an offensive mid-July Instagram post. (Photo: Sports Illustrated)

Cleveland Browns running back, Isaiah Crowell, donated $35,000 to the Dallas Fallen Officer Foundation in an attempt to move past a controversial anti-police post made on Instagram in July.

Crowell pledged his first pay check to the organization to make amends for his actions. “That’s just something that I wanted to do because I said that’s what I was going to do. I wanted to be a man of my word,” he told The Akron Beacon Journal.

In July, Crowell shared an illustration of a figured dressed in black slashing the throat of a police officer. He captioned it, “They give police all types of weapons and they continually choose to kill us ….#Weak.” The drawing came as a response to the fatal shootings of Philando Castile in Minnesota and Alton Sterling in Louisiana. Both shootings sparked mass protests and violent riots within their respective cities.

Amid fans calling for an end to his career, Crowell issued an apology, but for the team, an apology from the player wasn’t enough.

“We have spoken to Isaiah regarding his extremely disturbing and unacceptable social media decision,” the Browns said in the statement to Cleveland.com. “It was completely inappropriate and we have made him aware of our high level of disappointment.  Isaiah has apologized but also knows that just an apology is insufficient and that he must take steps to make a positive difference after a very negative and impactful post.”

Crowell’s first step was to accept an invitation to attend the funeral of slain Dallas police officer Patrick Zamarripa. The offer was extended by the president of the Dallas Fallen Officer Foundation, Sgt. Demetrick Pennie, after five officers were shot and killed in Dallas following a Black Lives Matter protest. Pennie said it was important for Crowell to meet officers and see, firsthand, the role law enforcement plays in communities.

“Years of broken communication has facilitated the rise in growth of flawed ideologies about police that we should be on the forefront of addressing. That is why I elected to meet with Isaiah Crowell personally to determine if there was any hope of reforming his thinking,” Pennie said in a post on Facebook. “Based on my interactions, I am confident that the policing community now has a supporter in Mr. Crowell.”

Pennie said when he learned of Crowell’s donation he immediately phoned the football player to inquire about the funds.

“I said, ‘Isaiah, why did you send me a check? I told you you didn’t have to send me a check.’ He said, ‘Sarge, I want to do it. I really want to do it,’” Pennie told USA Today. “I said, ‘okay, alright, you will now be an executive level sponsor. So now, you are a celebrity sponsor of the Dallas Fallen Officer Foundation.’”

Crowell is the league’s second-leading rusher and is estimated to earn $700,000 this season.