Anti-gun shock group claims to melt gun. It's from a 2012 video by a pro-gun YouTuber (VIDEO)

Betsy Riot, the Project Mayhemesque group of gun control advocates posted a too-goofy to be true “gun grabbin” tale to HuffPo and used screenshots from an IV8888 video as “proof.”

In a tall tale titled “Betsy Goes Gun-Grabbin’” the Crimethinc collective wannabes wrote, “Betsy got tired of waiting for the gunsucking cowards in Congress to get off their asses and save some lives, so she decided to take matters into her own sticky, chalky hands.”

Then claimed to have stolen several guns from multiple locations, posting four images of the same guns in different poses with various Betsy Riot signs. In each case, they implied to have easily lifted said boomsticks (all of which look like they came from somebody’s grandpa’s closet) from parking garages and public bathrooms.

Sure, they linked to cases of actual events in their copy, but speaking of actual events…the group then advised they melted a gun saying they did “a little DIY at home, and was pleased with the results” showing two images of a Hi-Point C9 in a cast iron pot aflame and then melted. 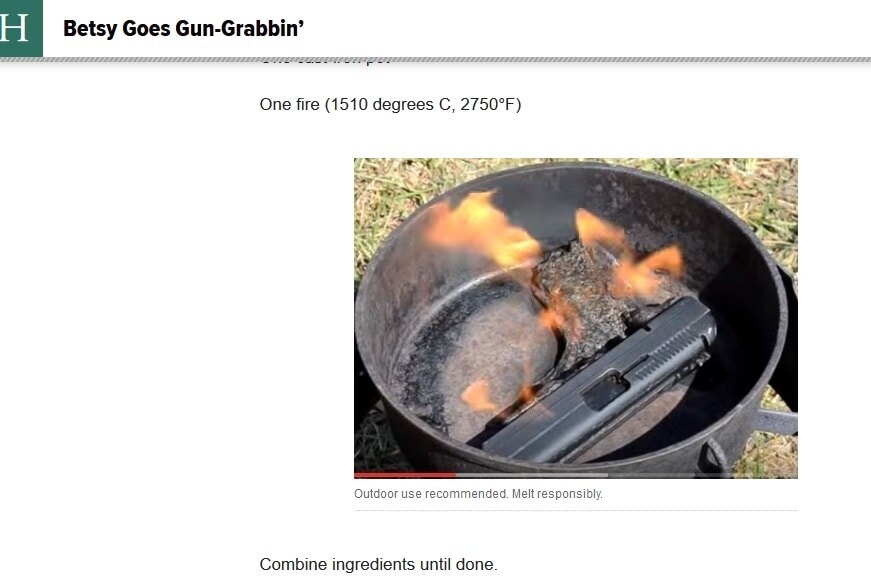 You can even see the YouTube video progress bar at the bottom of the image. Amateurs…

The thing is, the screenshots (because that’s what they are) are pulled from an old Moss Pawn/IV8888 video from four years ago that included the late gunsmith and showman Barry. As you likely know, the the IV8888 crew did the melt for science, not as a political statement.

The video, which is more amusing that Betsy’s troll post anyway, is below.