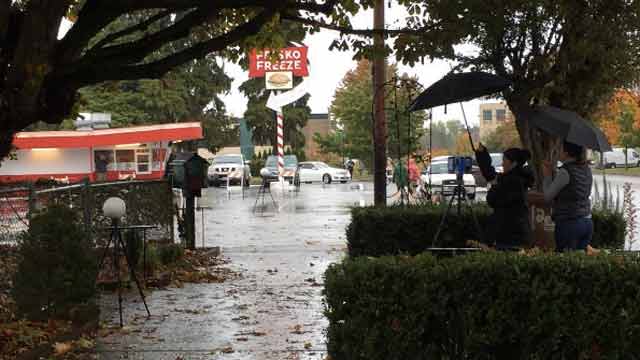 Investigators used a new technology to create a computer model of the scene. (Photo: Natasha Chen/KIRO 7)

A legally armed man fatally shot a suspect during a robbery Friday night in the parking lot of a Tacoma hamburger restaurant.

The suspect, who was later identified as 26-year-old Terry Webb, approached two people who were sitting in a vehicle in the parking lot of Frisko Freeze around 10:30 p.m. Webb attempted to rob the two men at gunpoint, but was unaware that the passenger was also armed.

The passenger retrieved his gun and shot Webb. At that point, a friend of Webb drove him to a nearby hospital where he was pronounced dead.

Peter Bstandig, a Frisko Freeze employee, was working the dinner rush when he saw the incident unfold then heard the gunshots.

“As soon as shots were fired, everyone kind of ducked and ran,” Bstandig told reporters.

A neighbor, who did not want to be identified, said he heard three or four gunshots, then more about 30 seconds later.

“It’s unfortunate somebody had to die, but if you’re going to rob somebody, maybe you should think twice,” the man said.

Richard Cays, a customer who, ironically, had just attended a gun show, said had he been placed in the same position of the victims, his reaction likely would have been the same.

Tacoma police said a female acquaintance of Webb was arrested for a part she played in the robbery, but did not further elaborate. Neither of the two victims were injured, and authorities confirmed the armed citizen had a valid license to carry a concealed handgun. He is not facing any charges.

“People do have the right to defend themselves, they do have a right to legally carry firearms, and in this case, this person did,” said Officer Loretta Cool, with the Tacoma Police Department.

The investigation is ongoing, but authorities do not believe there are any remaining suspects at large.