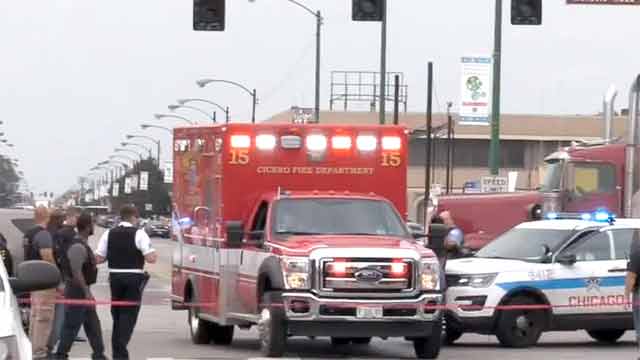 Altogether, three officers were injured in the attack and required medical attention, yet none chose to shoot the suspect. (Photo: ABC 7)

A response to a call about a traffic accident in Chicago’s Austin neighborhood Wednesday morning quickly turned violent, but at least one officer – although she feared for her life – refused to fire at the suspect, citing fear of the backlash that would follow.

The call came in around 10 a.m. after a man crashed his vehicle into a business, the Chicago Tribune reported. As officers arrived on the scene, they found the man wandering around. As they approached him to talk with him and ensure he was okay, the suspect – later determined to be high on PCP – turned on the officers and attacked them.

During the attack, the suspect repeatedly smashed a female officer’s head into the pavement with such force that she was knocked unconscious, but according to Chicago Police Superintendent Eddie Johnson, the fear of what her family would likely face overpowered the fear of her losing her life. For this reason, she chose to keep her service weapon holstered.

“As I was at the hospital last night, visiting with her, she looked at me and said she thought she was gonna die, and she knew that she should shoot this guy, but she chose not to because she didn’t want her family or the department to go through the scrutiny the next day on national news,” Johnson said the day after the incident.

Another officer tased the suspect and pepper spray was also used, but neither had any effect on the suspect. It still took three officers to subdue the man, but none of them fired any shots. Johnson, as well as Dean Angelo, president of the Chicago Fraternal Order of Police, noted that an increasing number of law enforcement officers are second-guessing themselves in dangerous situations thanks to a recent rise in police scrutiny.

“If you participate in a deadly force situation you can save your life,” Angelo said, “but in 2016, you can lose your job.”

“We have to change the narrative of the law enforcement across this country,” Johnson concluded, also noting that the attack came after a so-called routine call about “a simple traffic accident” where the officers went “to render aid wherever they could.”

Johnson said the injured officer, a 17-year veteran of the force, although severely injured, remained in high spirits and is recovering.

The suspect, who has a prior criminal history, now faces charges for the attack.