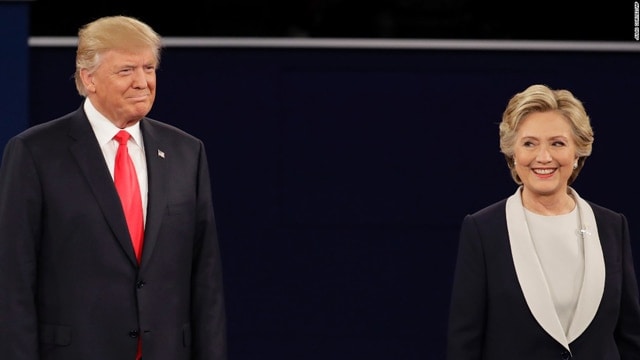 Despite an overwhelming number of online votes, debate moderators ignored crowd-sourced questions about protecting the Second Amendment and expanding background checks Sunday — and groups on both sides of the gun debate took notice.

“This debate was an opportunity for the anchors to step aside and for the American people to ask the questions that mattered most to them,” said Dan Gross, president of the Brady Campaign to End Gun Violence. “And what mattered most to the American people, by a margin of a quarter million votes, was gun violence and what each candidate would do about it. By ignoring that question, Anderson Cooper and Martha Raddatz robbed Americans of their voice. They turned a blind eye to the issue foremost on voters’ minds.”

While Trump vowed to select candidates who “respect the Constitution” and “the Second Amendment and understand what it means,” Clinton reiterated her support for expanded background checks and closing “loopholes” in online and gun show sales.

The brief statements riled up both sides of the debate, with Bob Owens, editor of Bearing Arms, clarifying in a blog post early Monday the loopholes Clinton intends to close don’t really exist because federally licensed dealers perform background checks at shows and for guns bought online and picked up in-store.

“What Clinton wants is to outlaw the private sale or transfer (including borrowing) of firearms between law-abiding citizens, including friends and family members,” Owens wrote. “The real purpose behind ‘universal’ background checks is a de facto gun registration scheme. By imposing a requirement that all transfers must go through the federal government, databases would establish precisely who has firearms in the United States, and what kind, in blatant violation of federal law.”

“On the surface, to Americans who don’t really know how the National Instant Criminal Background Check System (NICS) actually works, what she says sounds pretty reasonable,” Keane said. “NSSF research shows, however, that when survey respondents are told that the vast majority of firearms sales at gun shows are already covered by background checks support drops considerably.”

Trump’s comments about selecting a new Supreme Court justice “very much in the mold of” the late Antonin Scalia didn’t escape criticism either.

Scalia, notably, cast the deciding vote and wrote the opinion in the landmark District of Columbia v. Heller case, which reaffirmed the right of citizens to keep firearms in their homes for self-defense. It’s the mandate the National Rifle Association and other gun rights groups fear a liberal Supreme Court would eventually overturn.

Shannon Watts, founder of Moms Demand Action for Gun Sense in America, told Guns.com Monday, however, “even Scalia, who we shouldn’t forget, like Americans from all political stripes, supported common-sense gun safety measures.”

“The NRA leadership and their pick for president, Donald Trump, are focused on pushing their extremist agenda for guns everywhere, for anyone, no questions asked,” she said. “We were proud to see Hillary Clinton reiterate her support for background checks for all gun sales that will keep guns out of dangerous hands. That is why she has our vote.”

The NRA didn’t respond to requests for comment Monday, but did Tweet late Sunday “@HillaryClinton would appoint #SCOTUS justices who will overturn Americans’ #2A right to own a gun for self-defense. That is a fact.”