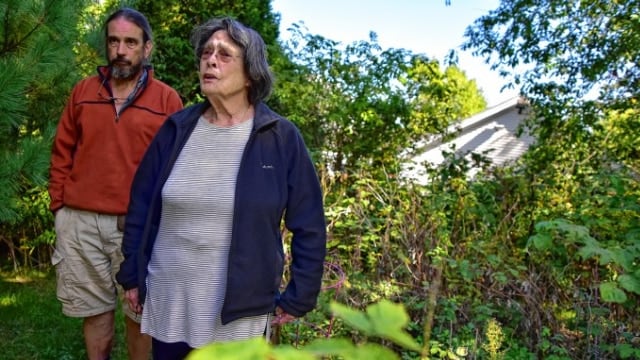 Margaret Holcomb and her son Tim were paid a visit by the Mass. State Police and National Guard last month, who found a curious plant in her raspberry bushes. (Photo: Andrew J. Whitaker/Gazette Staff)

After a Massachusetts National Guard helicopter spotted the plant in her backyard, Staties appeared by the truckload within 10 minutes to take it down.

South Amherst in the Springfield suburbs is a small town, pop. about 5,000 residents, including 81-year-old Margaret Holcomb who admitted she was cultivating a single marijuana plant to, as reported by the Daily Hampshire Gazette, ease her arthritis and glaucoma. Tucked away in her raspberry patch behind a privacy fence, it was not hidden from the eye in the sky and on Sept. 21 her adult son, having lunch with his sister, noticed a military helicopter hovering close by.

Ten minutes later, Massachusetts State Police appeared wanting the plant. According to the son, police said as long as he did not demand a warrant and turn over the plant, authorities would not file charges.

State Police spokesman David Procopio told the Gazette that 44 homes including Holcomb’s were visited during the operation, though no one was charged.

“At each location where property owners were home, troopers identified themselves and explained the purpose for the visit, why the plants were being grown illegally, and seized the plants,” said Procopio.

As for Margaret, she is contemplating growing another plant.

“I’m prepared to take actions if I need to,” she said. “I don’t picture them out here and putting an 81-year-old woman in jail.”

According to an article in the Febuary 2016 issue of National Guard magazine, over 2,200 service members are involved in the Guard’s counterdrug program which was funded at $192 million for the 54 programs nationwide this year. While each state’s program is different, most involve the use of aviation assets to spot plants that can only be detected from above. In some instances, soldiers and airmen lead counterdrug reconnaissance teams.

The incident in South Amherst is not the first that an 81-year-old was taken down by joint effort between the Mass. Guard and Staties. In July , Paul Jackson, 81, of Martha’s Vineyard, had his property stormed by agents who found and removed four (4) plants.

“I told them they don’t know what they’re doing, they’re destroying it and it could be used for good purposes,” said Jackson, a cancer patient who said cannabis tea had helped Mary, his wife of 53 years, through the pain of pancreatic cancer and chemotherapy.