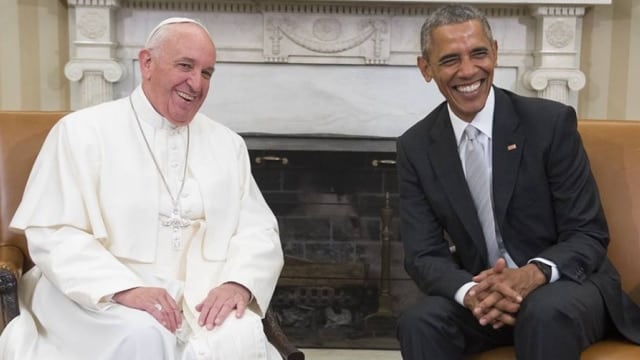 Pope Francis, shown above in his visit to the White House last summer, has named his first Catholic cardinals from the U.S. over the weekend. (Photo: AFP)

Two of the first U.S. Catholic bishops elevated by Pope Francis to the rank of cardinal have been forthright in their feelings towards increased gun control.

On Sunday, the Vatican announced 17 new cardinals that would be made official at the Nov. 19 consistory at the Holy See. The appointments include three Americans: Archbishops Joseph Tobin of Indianapolis and Blase J. Cupich of Chicago, as well as Kevin Farrell, who was the Bishop of Dallas until September.

Both Cupich and Farrell — who is currently the Pope’s Prefect of the Dicastery for Laity, Family and Life in Rome — have been publicly frank about gun control.

Last October, Cupich, current head of the 2.3 million Catholics of the Archdiocese of Chicago, delivered a scathing call to action against guns that was published in The Chicago Tribune.

“The Second Amendment was passed in an era when organized police forces were few and citizen militias were useful in maintaining the peace,” wrote Cupich in part of his 600-word opinion piece. “Its original authors could not have anticipated a time when the weapons we have a right to bear now include military-grade assault weapons that have turned our streets into battlefields.”

In response to a Texas law that went into effect this January to allow openly carried handguns, the Irish-born Farrell, then head of largest diocese in the state, decried “cowboy mentality” and declared church grounds off limits. As such, the religious figure ordered signage posted — allowed under state law — that bans the possession of any weapon in any facility owned, leased or operated by the million-member diocese.

“Sadly, Texas has become the 45th state to embrace the cowboy mentality that permits the open carrying of guns,” Farrell said. “It is difficult to see how this new law allowing persons with concealed handgun licenses to openly carry firearms can accomplish anything other than cause people to feel threatened and intimidated.”

The Pope himself has made remarks on several occasions in recent years that could be interpreted as anti-gun, last summer holding that weapons makers cannot call themselves Christian before reviling the global arms trade in a historic address to U.S. lawmakers.

“Why are deadly weapons being sold to those who plan to inflict untold suffering on individuals and society?” Francis asked in the first speech by a pope to Congress. “Sadly, the answer, as we all know, is simply for money: money that is drenched in blood, often innocent blood. In the face of this shameful and culpable silence, it is our duty to confront the problem and to stop the arms trade.”

The new cardinals announced over the weekend will bring the number to 56 that Francis has appointed since being elevated to papal status in 2014. They will join the over 200 members of the Vatican’s College of Cardinals, who advise the pope on church matters and, upon his death or resignation, elect a new pontiff.