Candidates kept to script in debate 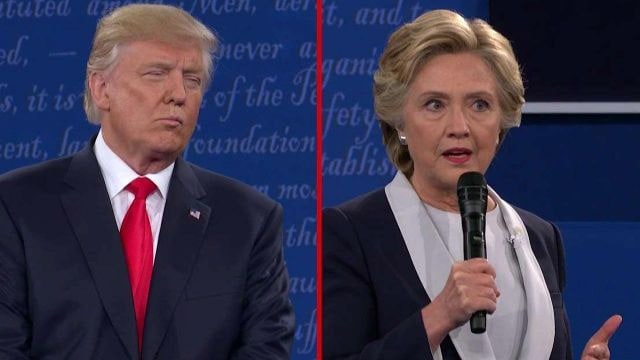 Republican presidential candidate Donald Trump said the Second Amendment “is under siege” during Sunday’s second debate as he fielded an audience question about his priorities for nominating Supreme Court justices.

Trump, referencing his list of 20 top picks to fill out the bench, said he would choose someone “very much in the mold” of the late Justice Antonin Scalia “who would respect the Second Amendment and what it stands for.”

The issue bubbled up in the last five minutes of the debate, although more than 296,000 people voted online for moderators Anderson Cooper and Martha Raddats to press the candidates on their stances on gun rights throughout the weekend.

Specifically, more than 160,000 people wanted to know how Clinton and Trump “would ensure the Second Amendment right is protected” — this less than three days after a question about support for universal background checks claimed the top spot with just under 42,000 votes.

As Guns.com previously reported, moderators for Sunday’s town hall-style debate took questions both from a live audience and those submitted online through the Open Debate Coalition.

The National Rifle Association, in a post dating back to Sept.30, urged gun owners to vote for the Second Amendment question, as originally posed by Tim S., who says “too much crime is blamed on the tool, not the person.”

Gun control remains a cornerstone of Clinton’s platform. An unconfirmed Wikileaks dump of documents hacked from her campaign chairman’s email account suggests the nominee remains committed to using executive order to close the “gun show loophole” should Congress fail to act. It’s a position Clinton has publicly stated before — as well as her desire to repeal a 2005 law shielding gun manufacturers from frivolous lawsuits.

She again mentioned closing the loophole at the debate Sunday, but didn’t promise to use executive order to do so.

“I respect the Second Amendment, but I believe there should be comprehensive background checks,” she said.

Pro-gun groups, including the NRA, fear Clinton will stack the Supreme Court with liberal justices intent on eroding Second Amendment rights. Clinton said Sunday her priorities for picking new justices include nominating those who would overturn Citizens United, uphold Roe v. Wade and marriage equality and “recognize that voting rights are still a big problem in many parts of our county.”

Clinton only mentioned her views on gun control in response to Trump’s comments about protecting the Constitution and the Second Amendment.

“Hundreds, if not thousands of questions have already been submitted, including those by the anti-gun groups,” the NRA said. “That is why we need you to step up, and make sure the right questions get asked this time! No more easy passes for Hillary Clinton!”

The second-most popular question — with 136, 869 votes — asks the candidates whether each would support universal background checks for all gun sales.

Dan Gross, president of the Brady Campaign to Prevent Gun Violence, said Tuesday the overwhelming support for the question proves “voters are focused on solutions to the issues that keep them up at night, even if not all the candidates share that focus.”

Over the last 16 years, Trump’s stance on gun control morphed from support of assault weapons bans and 72-hour waiting periods to criticizing “gun free zones” and bragging about his concealed carry permit.

The NRA officially endorsed Trump in May.