5 teens in custody for string of Indianapolis robberies 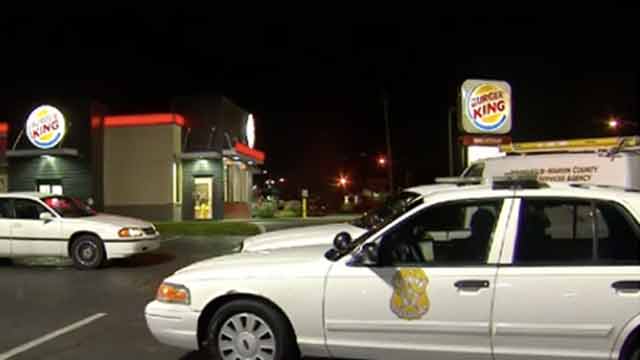 A gunfight erupted inside the Burger King, but no one was injured and the suspects initially escaped. (Photo: WTHR)

An attempted robbery at an Indianapolis Burger King last week was interrupted by an armed citizen and now the five teen suspects – believed to be responsible for a string of recent robberies – are all in police custody.

The incident unfolded around 9 p.m. Wednesday. As the concealed carry permit-holder, who also happens to be a firearms instructor, was leaving the restaurant with his food, the group of suspects were going inside. But the armed citizen, who has not been publicly named, noticed the suspects putting on masks as they walked through the door and immediately knew something was awry.

The man returned to the restaurant and walked in behind the suspects, who already had their weapons drawn. The man ordered the suspects to drop their weapons, but rather than complying they simply turned their guns on the man. At that point, gunshots were exchanged.

Authorities caught up with the suspects about 40 minutes after the Burger King robbery. Two of the suspects – Antonio Cowherd and Mikel Kendrick – are 19-years-old, while the remaining three are juveniles. All five are facing robbery charges.

Officials confirmed that the armed citizen has a valid concealed carry permit and was legally carrying his weapon. He is said to be fully cooperating with the investigation.

Deputy Chief Valerie Cunningham with the Indianapolis Metropolitan Police Department was adamant that gun owners know when it is appropriate to use deadly force.