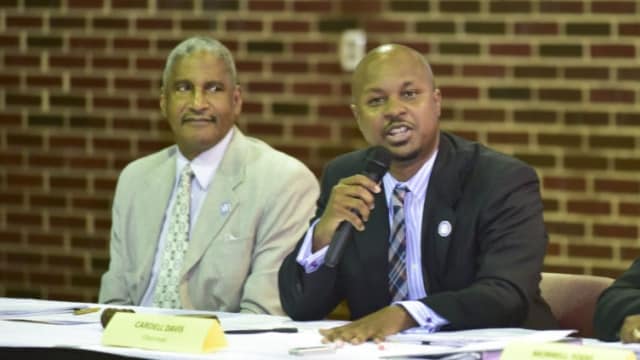 HABD President/CEO Michael Lundy, left, has a plan to cut violence in the housing under his control that includes a possible ban on firearms. (Photo: Frank Couch/HABD)

In the wake of a shooting that left one dead and three injured, the Housing Authority of the Birmingham District announced a plan that includes a zero tolerance policy for gun ownership.

On Sept. 12, Bobby Clayton, 20, described in local media reports as an innocent bystander, was fatally shot in the Gate City community that left three others inhured. While a suspect is in custody, the housing authority has since unveiled a multifaceted security plan to curb violence in the 14 public housing sites it manages through a blend of increased police patrols, a new public safety position, community interaction and an outright ban on guns.

“We’re willing to do whatever it takes to rid the community of crime and violence,” HABD President/CEO Michael Lundy told the Board of Commissioners last month. “As president and CEO it’s time to take extraordinary action to do whatever we can. I don’t care who gets upset with what we’re trying to do.”

Lundy’s plan for the authority’s 5,000 units would include more police presence and community engagement. This would be facilitated through a new director of public safety position who, once hired, would serve as a liaison between local authorities and residents.

Next would be a ban on firearms ownership enforced through lease agreements with tenants. Lundy said the authority would coordinate a gun “buyback” event to help promote the idea.

While the gun ban can be viewed as arbitrary and a potential violation of the Second Amendment rights of residents, Lundy is sticking to it.

“It’s time to take extreme measures to address these extreme issues,” he said.

Courts have generally taken a dim view of prohibiting lawful guns in public housing. In 2014, the Delaware Supreme Court struck down policies prohibiting guns in common areas of the Wilmington Housing Authority as being unconstitutional.

The court noted that the policies were “overbroad and burden the right to bear arms more than is reasonably necessary … by functionally disallowing armed self-defense in areas that residents, their families, and guests may occupy as part of their living space.”

A defensive gun use by a 67-year-old disabled man who shot an intruder during a break-in at his Rockland, Maine, affordable housing apartment in 2015, wound up in litigation after his landlord sought to enforce their local gun ban. The parties involved later came to a settlement following the passage of a new law that prevents public housing authorities and private landlords from lease agreements or policies that restrict lawful gun rights.

While some states — for example Alabama’s neighbor to the East, Georgia — have codified prohibitions against such bans, state law in the Yellowhammer State is less clear. To the north, Tennessee Attorney General Bob Cooper in 2009 issued an opinion that landlords can ban their tenants from bringing firearms into their property even if they have handgun carry permits.

The federal government, who oversees public housing funding through the Department of Housing and Urban Development, does not address gun rights in its policies on tenants’ rights. A 2009 U.S. House bill that would have protected the Second Amendment rights of those in affordable housing did not make it out of committee.

Lundy, who said the housing authority is still hammering out their plan, is bracing for a fight.

“I’m gonna push it if I have to go to the Supreme Court, the highest court in the land,” he told AL.com. “I don’t have any problem talking to anybody about it, but I want to go with a strong legal case.”