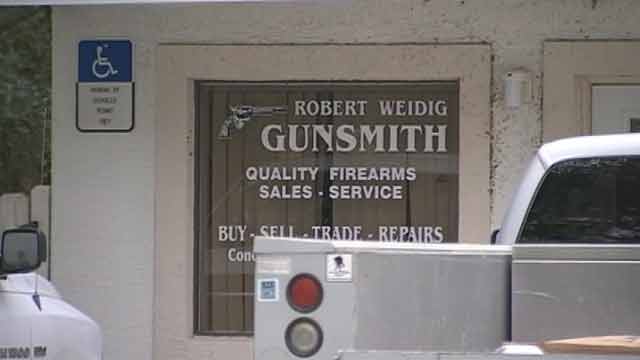 Authorities are investigating a burglary that occurred at a gun shop in Palm Coast, Florida, over the weekend during Hurricane Matthew.

Altogether, 41 rifles, shotguns and handguns, along with corresponding ammunition and other equipment was taken from Robert Weidig’s Gunsmith Shop, the Flagler County Sheriff’s Office confirmed in a press release. The burglary is believed to have taken place some time between Thursday night and Sunday.

Deputies were called to the gun shop, which had lost power due to the hurricane, just after 1 p.m. Sunday when a nearby business owner realized the shop appeared to have been broken into. According to a local ABC affiliate, the woman noticed the doors of the gun shop were open and contacted the owner to let him know she believed someone had broken into the business.

Through the investigation, detectives were able to obtain a search warrant Monday evening, which was executed by the Flagler County Sheriff’s Office, along with the help of the St. Johns County SWAT team. During the execution of the warrant, 20 of the stolen firearms were recovered. The suspect was charged with burglary and grand theft. It’s unknown if the same suspect is responsible for the other stolen goods as well.

The incident remains under investigation and the Bureau of Alcohol, Tobacco, Firearms and Explosives is assisting the Flagler County Sheriff’s Office.

Anyone with information about the break-in is asked to contact the Flagler County Sheriff’s Office at (386) 313-4911. Individuals can remain anonymous by contacting Crime Stoppers of Northeast Florida at 1(888) 277-8477 (TIPS). Authorities are offering a reward of up to $1,000 for information about the case.