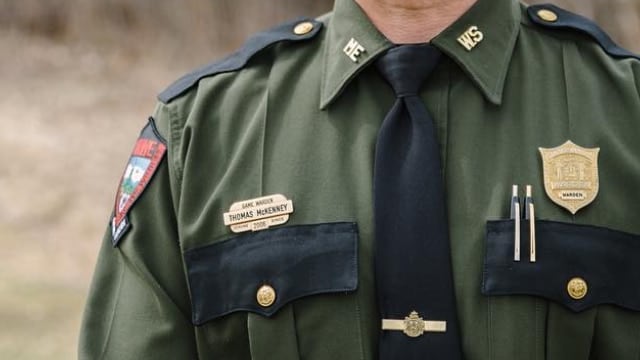 The service feels Q3 will have negative impacts on some individuals who hunt and trap in Maine. (Photo: Maine Wardens Service)

In the latest salvo of law enforcement coming out against Question 3, which would mandate background checks for private gun transfers, the Maine Warden Service has voiced concerns.

The ballot measure, backed by more than $3 million in donations– largely from gun control groups financed by former New York Mayor Michael Bloomberg– would change current state law to mandate many new instances in which a background check would have to occur before a firearm could be transferred from one person to another.

This has the Warden Service of the Maine Department of Inland Fisheries and Wildlife worried about how it will affect hunting, a sport in which guns are frequently loaned to others especially in the case of apprenticeship and youth hunting.

“For example, the law will make it far more difficult for two hunters who have no criminal records and are legally entitled by law to possess firearms to share or loan their firearm to other legal hunters who are not prohibited from possessing firearms,” noted the service in a statement on Q3 posted Tuesday.

The conservation agency notes that, while the expansive four-page text of the initiative allows for some temporary transfers to occur without a background check, “This exception also requires the transferee to possess the gun exclusively in areas where hunting is legal,” and require the gun owner to accompany the borrower at all times, which could prove an enforcement nightmare as wardens in the field would be unable to verify “unless the transfer was actually observed by the officer.”

While falling short of flat out urging a “no” vote, the agency ended their statement by saying, “The Maine Warden Service encourages Maine citizens to carefully consider the effects that Questions 3 will have on our outdoor heritage.”

The service, established in 1880, is Maine’s “thin green line” in the heavily forested New England state, which regularly sees a huge influx of nonresident hunters from across the country each season. Although staffed by just 125 sworn law enforcement officers, the service has a huge voice for an agency its size as it is the subject of the popular Animal Planet show Northwoods Law.

Hunting is a popular pastime in the Pine Tree State, with over 200,000 active sportsmen purchasing licenses every year. In 2014, a ballot referendum funded by the Humane Society of the U.S. to limit the state’s bear hunting program was soundly rejected by voters as was a previous one in 2004.

Pro-hunting groups such as the Sportsman’s Alliance of Maine, Friends of Maine Sportsmen and Gun Owners of Maine have been against the Bloomberg backed initiative from the start, as has the state’s Republican Gov. Paul LePage who has characterized it as the next step to gun registration and confiscation.

The warden service joins 12 of 16 elected sheriffs in Maine, who came out very vocally against Q3, arguing the measure was unenforceable and, in a state ranked among the most peaceful in the nation, simply not needed.

Mainers for Responsible Gun Ownership, the group fronting the referendum, do have the support of the Maine Chiefs of Police Association.