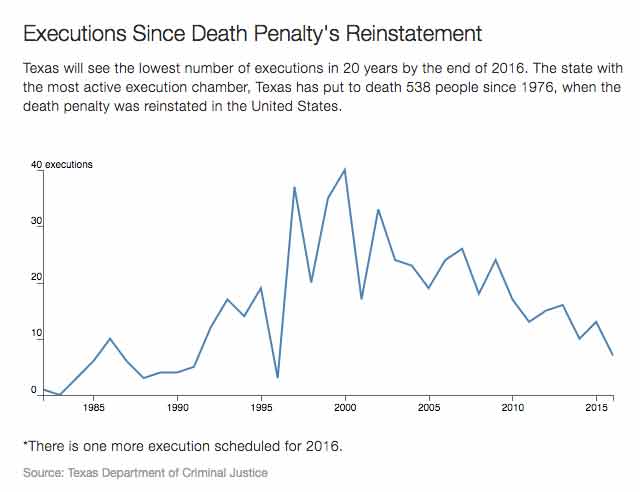 Typically infamous for its high number of executions, the state of Texas is set this year to see its lowest numbers in two decades.

So far, Texas has put seven people to death in 2016, with one more execution scheduled for December. This not only marks a 20-year low for the state, but also the first time in 20 years that the state’s execution rate has dropped to single digits. Nationwide, the number of executions this year currently stands at 16, the lowest number in 25 years.

Likewise, at this time, Texas has five executions scheduled for 2017, according to the Texas Department of Criminal Justice. But currently, there are 243 people on death row in the state, again, the lowest number in nearly 30 years. However, two of those currently on death row – Duane Buck and Bobby Moore – are fighting their executions in the U.S. Supreme Court. In 2016 alone, 11 individual’s executions were stayed a total of 15 times.

“There is clearly a change going on in Texas,” said Robert Dunham, executive director of the Death Penalty Information Center.

Experts point to different reasons for the decrease in the state’s execution rate, ranging from a change in legislation to advancements in forensic science and an overall drop in crime rates.

Since 1976, when the death penalty was reinstated, Texas has executed 538 people. The annual numbers started to dwindle – and have continued to decline – since 2005. One significant occurrence that year was the introduction of the life without parole sentence.

Greg Garnder, an attorney for John Battaglia, who is set to be the last person executed in Texas this year for fatally shooting his two daughters, said the court system more closely scrutinizes forensic evidence than they once did.

Likewise, executive director of the Texas District and County Attorneys Association, Robert Kepple said the decrease in executions could be attributed to a decrease in the homicide rate.

“Could it simply mean there are a lot less murders in Texas these last 15 years, so naturally the number of death-eligible defendants is way down as well?” Kepple wrote in an email to The Texas Tribune. “That, coupled with life without parole option, means less death penalties.”

But Kepple also noted, overall, the number of executions tends to “ebb and flow.”