The FBI maintains a database of wanted bank robbers from unsolved heists in their “Robbers Container” and some of the disguises used are weak.

The container has some 600 unknown robbers cataloged, so if you see anyone you recognize contact your local FBI Office. Most of the below have $1,000 rewards. Also, in the age of mobile devices with multi-megapixel cameras, WTF is the deal with bank security pictures? There are better images of Bigfoot out there. 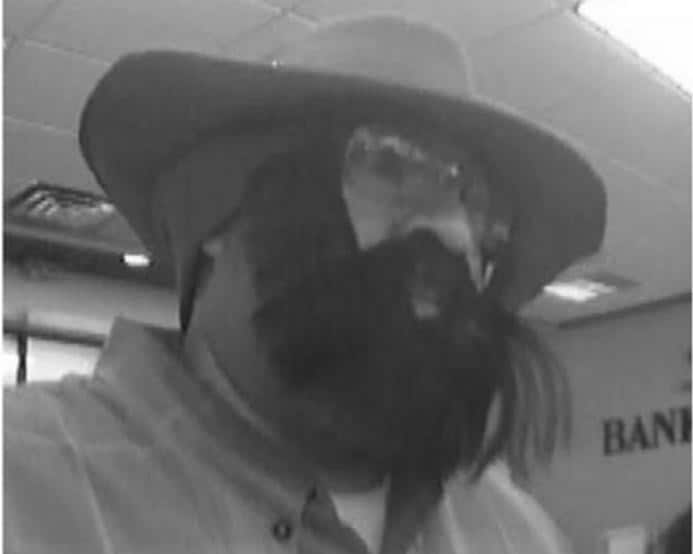 Albuquerque, New Mexico. October 15, 2012. The suspect wore a green plaid long-sleeved shirt, a tan wide-brim hat, clear glasses, and a bushy black beard that “may” have been fake. 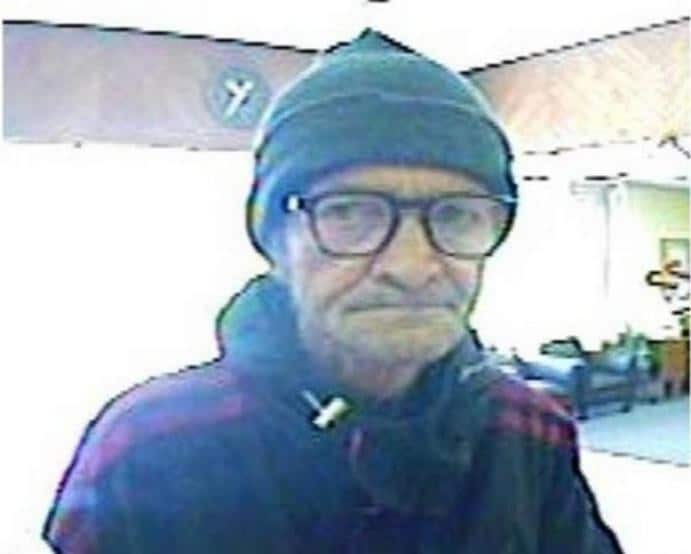 Carlsbad, New Mexico. December 13, 2012. The suspect wore black-rimmed glasses, a dark jacket and a green stocking cap. He was unshaven. 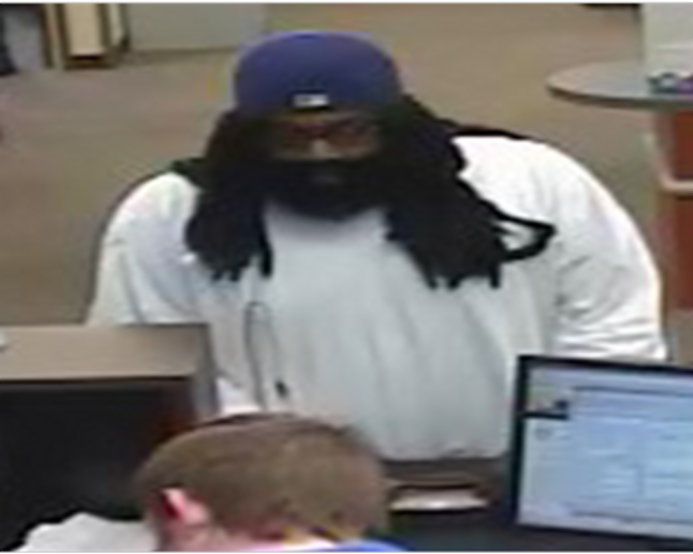 Little Rock, Arkansas. May 31, 2013; September 6, 2011. In the robbery of the Metropolitan Bank, the suspect wore black prescription-like glasses; a full solid black beard (possibly fake); black dread-locks that hang down to the middle of his back (possibly fake); a solid white, plain, long-sleeved tee shirt; and a solid blue baseball cap (worn backwards). In the robbery of the Arvest Bank, the suspect wore sunglasses, fully bushy beard (possibly fake), a white shirt, tan pants, brown hat, and white tennis shoes. 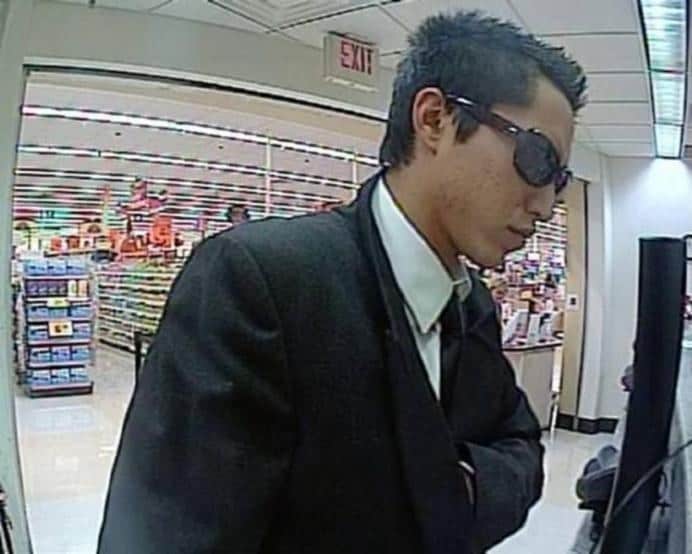 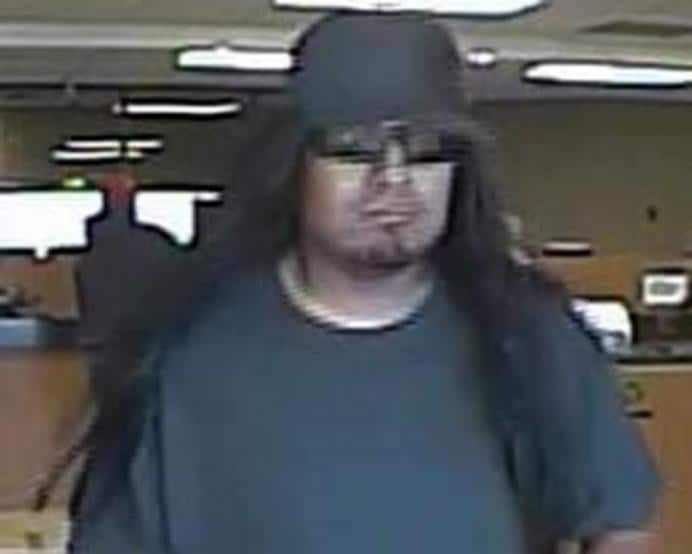 What’s up with Albuquerque? This one did back to back robberies on October 3, 2014 and October 4, 2014. The suspect wore a black baseball cap, sunglasses, a long black wig, a black t-shirt, blue jeans, and sneakers. He carried a black cloth bag and had a small amount of facial hair on his chin. 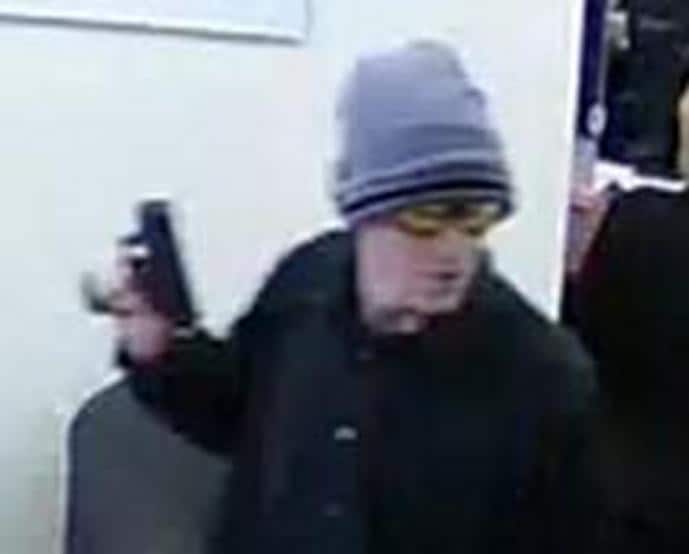 This guy has pulled at least nine robberies in California over the past few years. During the commission of most of the robberies, the suspect has worn dark-colored clothing and a hat–frequently a knit cap and has carried a backpack or messenger-style bag. He wore a dust mask during the Walnut Grove robbery and wore wrap-around, sport-style sunglasses during the May 9, 2016, robberies in Weaverville and Durham. 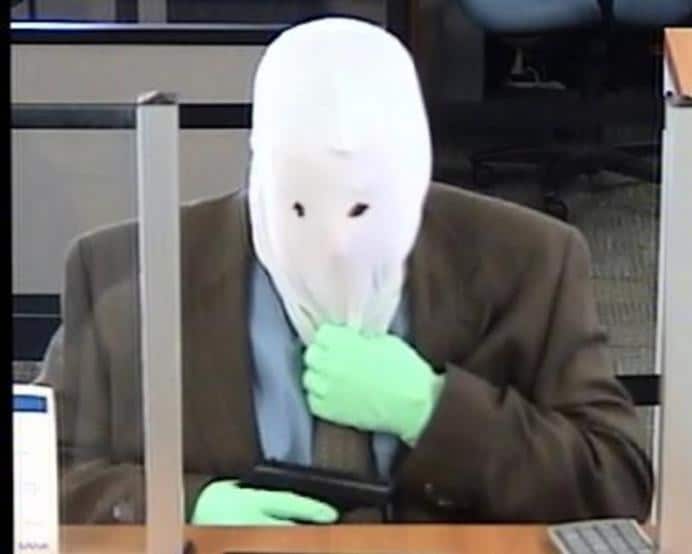 Known as “Straw Hat Bandit” due to the fact that he has worn a panama jack style straw hat in several of his heists, this guy knocked off four Pennsylvania banks in 2012-13. In each robbery, the subject has covered his face with a black ski mask or a white pillowcase/sack with eye holes cut out. Why not call him sackman? 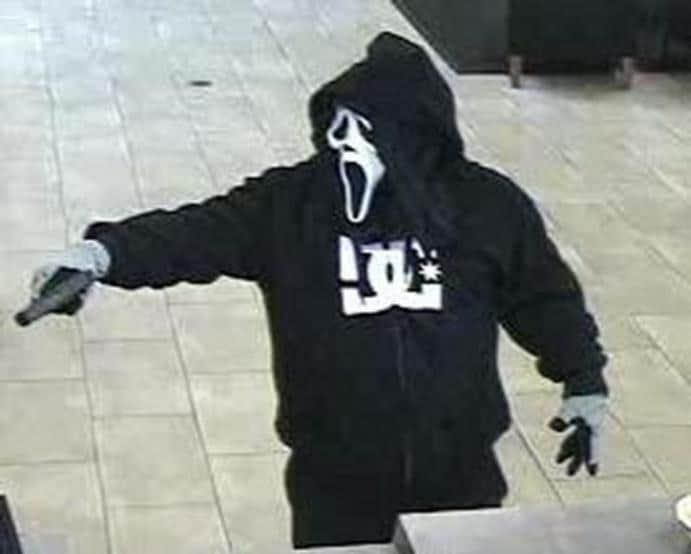 Scottsdale, Arizona. February 23,2015 The suspect wore a “Scream” mask, a black hooded sweatshirt with a “DG” logo in white letters on the front, black pants, and black tennis shoes with white soles. 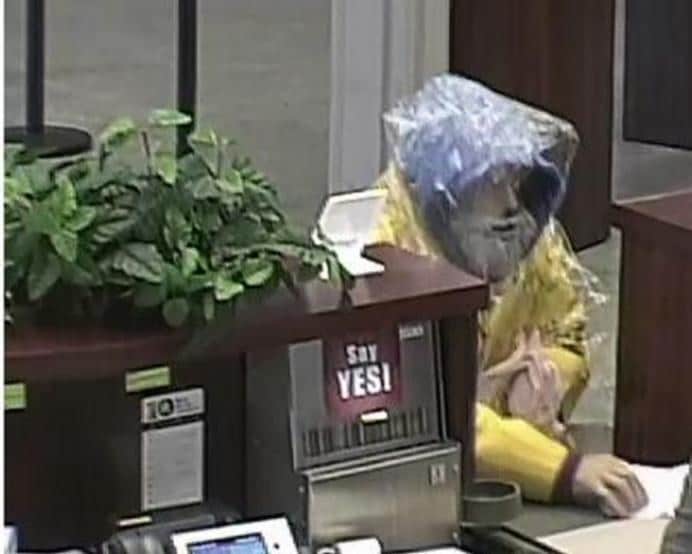 In 2015, this man robbed banks in Sacramento and Carmichael, California some six months apart. At the time of the June 10, 2015, robbery, the suspect wore a yellow rain jacket, blue hoodie and a clear poncho over his clothes. He also wore boots that seemed too large for him. At the time of the December 3, 2015, robbery, the suspect wore an orange rain poncho over dark clothes. He also wore sunglasses and a fake beard. 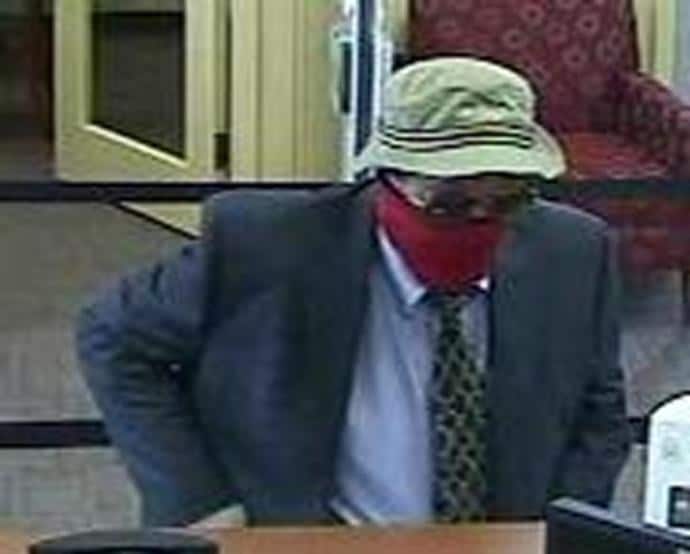 For when you have to make a quick stop to pick up some cash between work and the lake.The subject in this 2015 Dresher, Pennsylvania robbery is described as a White male, 50 to 60 years of age, 5’11” to 6’1″ tall, medium to heavy build, wearing a blue business suit, a blue button-down dress shirt and a patterned tie, a light-colored “bucket” style hat, dark sunglasses, a red scarf over his nose and mouth, and white rubber gloves. 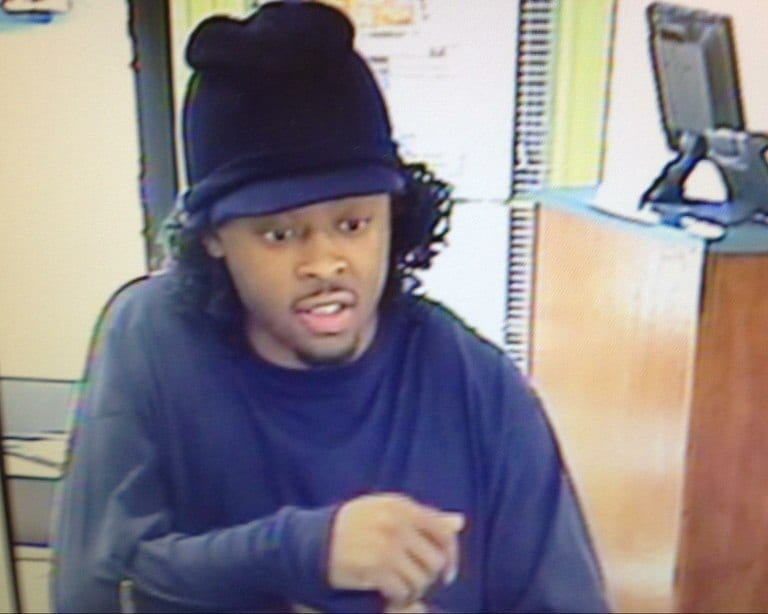 This guy looks pretty distinctive but hasn’t been caught since his October 2015 robbery in Winston-Salem NC. Pretty good disguise 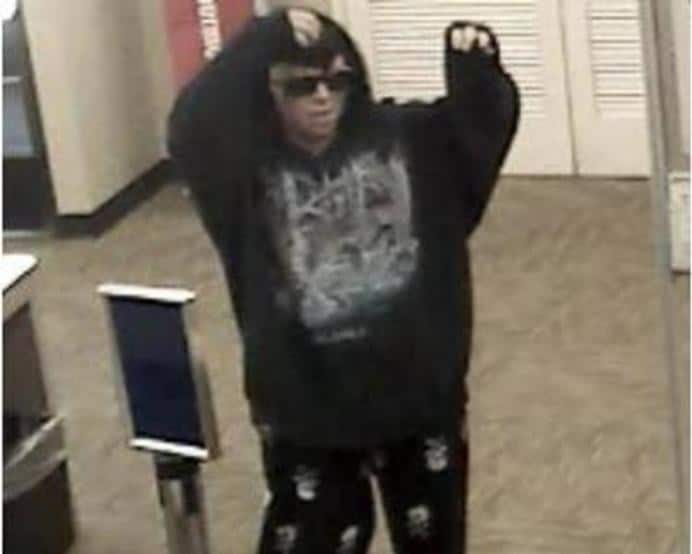 Wait for it…Albuquerque, October 2015. The suspect wore a short, black wig; large sunglasses; dark pajama pants with images of skulls on them; a dark, loose-fitting sweatshirt; and tennis shoes. 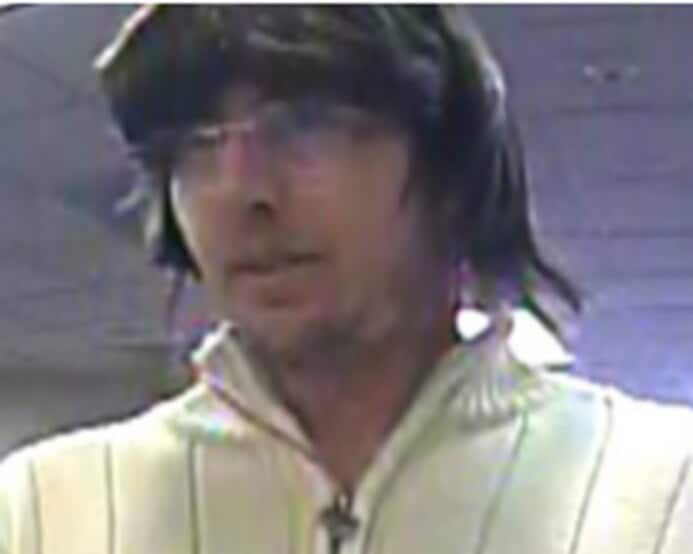 The “Thug in a Rug Bandit” has hit four banks in Washington state this year. The subject wore a wig in each of the robberies and, during the June 3rd robbery, he was described as having a black mustache. He may possibly have a tattoo on the upper right side of his chest, and a possible deformity or twitch in his right eye. 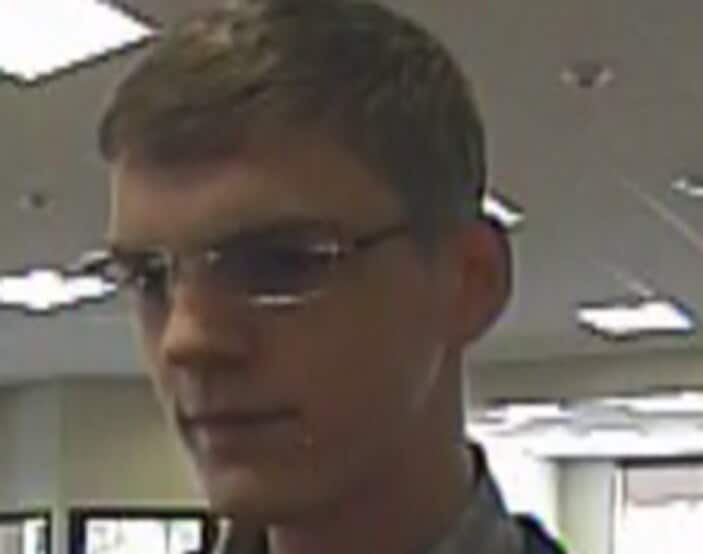 The “Harry Potter Bandit” has hit three banks in Washington state this year. The suspect wore a dark-colored zip-up jacket or sweater, button-down shirt, blue jeans and brightly colored shoes. He wore glasses in one robbery. No word on if he is going to team up with the “Thug in a Rug Bandit” and make a caper movie.