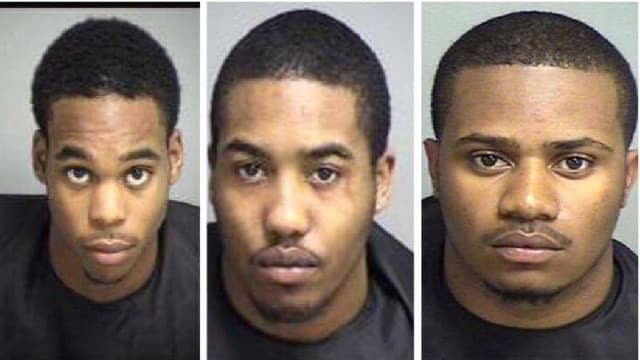 Jaquan Harris, Kwamane McCoy, and Dequan Kelso were sentenced this week for the break-in of TNT Outfitters in Appomattox (Photo: Appomattox County Sheriff’s Office via WSET)

Three Northern Virginia men, all felons in their early 20s, were sentenced Wednesday for the burglary earlier this year of a licensed firearms dealer.

In the predawn hours of Jan. 10, four men broke into TNT Outfitters in Appomattox and cleaned out the gun shop of every firearm they could get their hands on that was not secured in the store’s safe. The men were all arrested within 24 hours and three: Jaquan Harris, 21; Kwamane McCoy, 22, and Dequan Kelso, 23; plead guilty over the summer and were sentenced this week in the U.S. District Court in Lynchburg.

“Keeping illegal guns out of the hands of prohibited users is a priority of the United States Attorney’s Office,” U.S. Attorney John P. Fishwick Jr. said in a statement. “One of the first steps we can take in keeping our communities safe is getting illegal guns off our streets. This case is a prime example of law enforcement working to do just that.”

As noted by court documents, Appomattox County Sheriff s Office investigators and agents from the Bureau of Alcohol, Tobacco, Firearms and Explosives developed leads that led to Kelso’s arrest within hours of the burglary. In an interview with authorities, Kelso explained the trio, along with a fourth suspect, Christopher McCoy, had hatched a plan while drinking booze and smoking dope late in the night on Jan. 9 to burglarize the gun shop. Gathering dark clothes, masks and backpacks, they walked through the woods, muscled up the garage door and crept inside, grabbing every gun they could.

The 56 firearms were split between the four, 26 of which were recovered in subsequent search warrants. All four were arrested and admitted their role in the crime.

Christopher McCoy previously pleaded guilty to breaking and entering and to firearm larceny, receiving a sentence of five years on each charge, with all but six months suspended and three years supervised probation.

The other three, all with felony records, plead guilty to one charge each of stealing firearms from a federally licensed dealer and being a convicted felon illegally in possession of a firearm.

Some 30 firearms, including a Glock 17, HiPoint C9, S&W M&P 9 Pro, Remington Model 700 and a Ruger Mini 14, remain missing. The ATF has offered a $10,000 reward to anyone with knowledge of the whereabouts of the missing firearms.