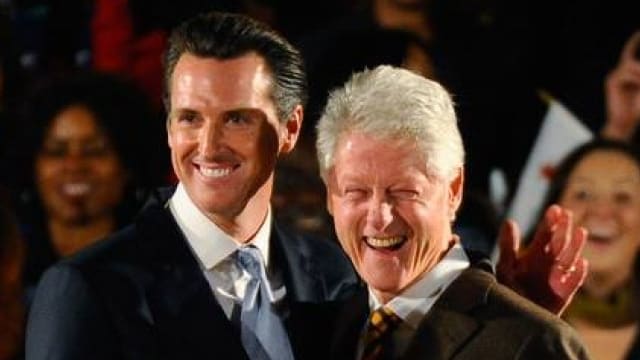 Lt. Gov. Gavin Newsom has tapped into both his remaining campaign funds from 2014 and fellow Democrats to fuel his ballot referendum on guns and ammo. (Photo: Gavin Newsom/Facebook)

Listed as Prop. 63 on the ballot in front of voters in just under a month, the sweeping measure will further entrench a host of new laws already signed by Gov. Jerry Brown this year as well as limit ammunition sales in a number of unconventional ways.

According to figures maintained by California Secretary of State Alex Padilla as of Oct. 13, Newsom’s campaign has raised at least $5,065,019.

Of Newsom’s millions, analysis by Guns.com shows no less than $1.18 million in donations from the state Democratic Party. Newsom’s own campaign for lieutenant governor has forwarded $727,564 in contributions left over from his successful 2014 bid for his current office. And then comes a host of billionaire philanthropists.

Former Facebook president and Napster co-founder Sean Parker — who is also helping to front a ballot measure in Nevada — has chipped in $400,000. Real estate broker George M. Marcus and Hyatt Hotels heir and billionaire Nicholas Pritzker have each given the campaign $250,000. Longtime Democratic Party benefactor San Francisco philanthropist Susie Tompkins Buell has forked over $200,000. Dagmar Dolby and Alexander Soros — son and heir of billionaire George Soros — have each donated $100,000.

The prize at the end of the tunnel for donors is a referendum that, if approved by voters, will end grandfathering of magazines capable of holding more than 10 rounds, require relinquishment of weapons by those prohibited by the state from legal possession and mandatory reporting of lost or stolen guns. In addition, it would require background checks prior to all ammunition sales – a first for any state — and require cartridges bought online be sent to a licensed dealer to arrange the transfer.

Going beyond funding, Newsom has the endorsement of a number of gun control organizations including the Brady Campaign and the Law Center to Prevent Gun Violence; urban mayors and city council members; medical lobby groups such as the California Medical Association and large papers in the state including The Los Angeles Times. U.S. Sens. Dianne Fienstein and Barbra Boxer, Democrats who have been gun control stalwarts in Washington, support the initiative.

Of the two groups opposing Prop. 63, total funding amounts to just $707,976 or about 14-cents to each dollar raised by Newsom.

Most of this, some $448,568, has gone into the lead umbrella organization set up to fight the measure, the Coalition for Civil Liberties. Contributions to the CCL have come from the National Rifle Association, Citizens Committee for the Right to Keep and Bear Arms, California Rifle & Pistol Association, California Waterfowl Association and Gun Owners of California as well as some smaller individual donations.

Another grassroots effort, Stop Prop 63, is sponsored by Firearms Policy Coalition and has raised $259,408.

In their corner, the groups vying for a “no” vote on the proposition have the overwhelming support of law enforcement, anti-terrorism experts, conservation and civil liberties groups. Six-time Olympic shooting sports competitor Kim Rhode, a California resident, has been openly sparring with Newsom on social media over the planned restrictions on ammo. Several smaller papers in the state have slammed Newsom as using the often-duplicative ballot measure to help pave the way for his bid for governor.

“We also shouldn’t encourage publicity-seeking politicians such as Newsom, who have their eyes on higher elected office, from using the initiative process for personal gain,” noted the editorial board of The Fresno Bee.

As a hedge against future regulations, many Californians are stocking up on guns and ammo now. The Sacramento Bee is reporting brisk sales at gun shows, chain stores and small gun shops while state Attorney General Kamala D. Harris announced this week that gun sales have grown significantly since 2006, in some counties as much as 400 percent, and that in 2016 more than 1 million guns are expected to be sold in California.

“The dramatic spike in gun sales over the last 10 years reflects the continued need for smart and sensible gun safety laws,” said Harris in a statement.