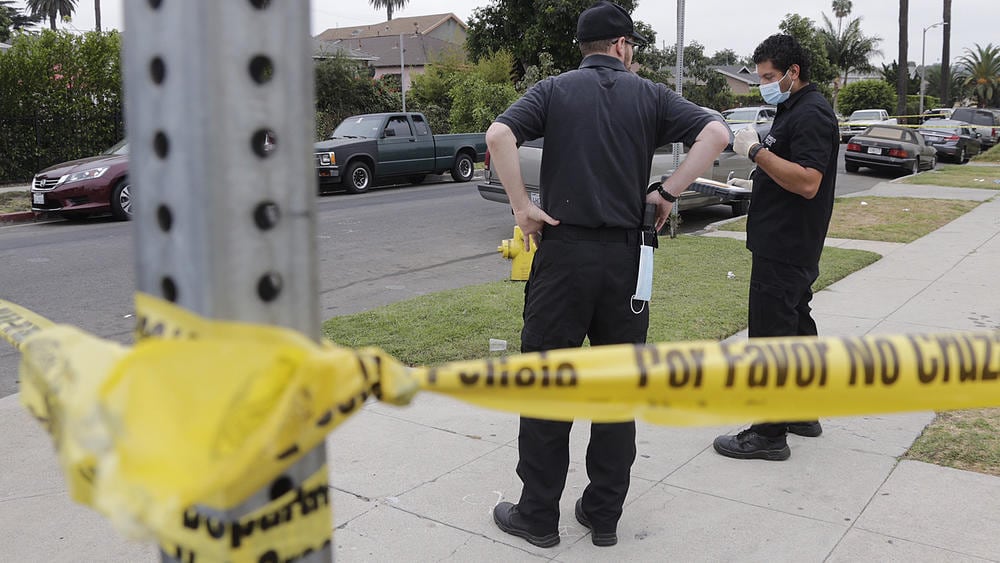 Officers block off the area near Dilly’s Kitchen where three people were fatally shot and 12 others were wounded. (Photo: Irfan Khan/Los Angeles Times)

Three people are dead and a dozen wounded after gunfire erupted in a restaurant in Los Angeles early Saturday morning.

According to witnesses, the shooting occurred after an argument inside Dilly’s Kitchen,  a Jamaican eatery operating out of a converted home. Three men left after the fight but soon returned with guns, unleashing a hail of bullets. Other patrons returned fire and several occupants were caught in the crossfire.

“It’s a bloody scene with shell casings everywhere,”  Los Angeles Police Department Sgt. Frank Preciado said, describing the scene to the Los Angeles Times. “When we got there, there were three people dead and people running everywhere.”

Names of the deceased and injured have not been released by Preciado said that the injuries range from mild to critical.

One man and one woman were taken into custody after the shooting as “persons of interest.” However, police are reluctant to label them as formal suspects. The LAPD says they are continuing the search for at least three suspects.

“We have street names for these suspects but we don’t who the killers are yet,” LAPD Capt. Peter Whittingham said. “The people shot either don’t know the killers or aren’t telling us what they do know.”

Authorities say an exact motive is unclear but a gun was recovered at the scene.

There were at least 50 people inside the diner in the 2900 block of Rimpau Boulevard at the time of the incident. The restaurant owner, identified only as Dilly by the Los Angeles Times, is fully cooperating with police.

Los Angeles Mayor Eric Garcetti was notified and called the shooting, “the latest example of a senseless gun violence epidemic that causes so much pain and sorrow in our city and across the nation.”

“Our thoughts are with the families mourning or praying at bedsides today,” Garcetti continued in a statement. “We must take action against easy access to firearms and the thoughtless, indiscriminate, murderous use of them.”