For two days in October, the Gander Mountain training facility near Orlando was occupied by the Blue August gun writers’ conference. The annual event offers a small group of writers the chance to hear firsthand about gun makers’ new and featured products, as well as to fire the weapons on the Gander Mountain indoor range. Here are a few highlights from each: 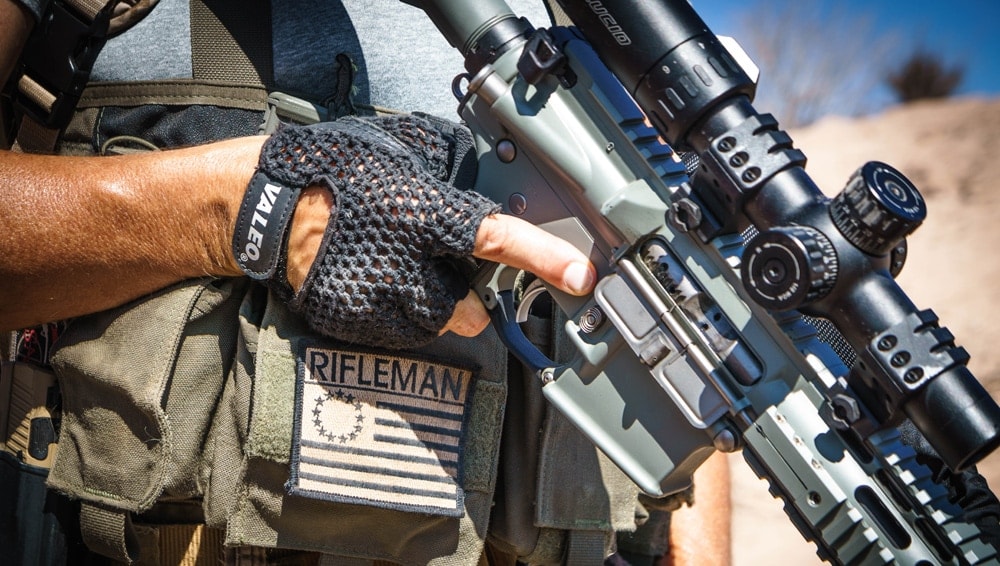 Jason Wilson took the leap of starting a company in his Riverton, Wyoming, home base in 2008. The first Lucid optic was the AC7 red dot, released in 2009. “That turned into a phenomenon,” Wilson said. The company is now selling optics in 14 countries.

Wilson’s still-small but successful business now produces ACOG-style, mid- and long-range scopes, and a portable spotting scope. At the conference, he showed off his latest concept, a weapon-mounted light for long guns. Wilson’s inventive mind also created the Snap Rack, a rapid-access storage device that fits on post-style auto headrests. It offers bounce-free storage on the rear surface of the front seat, making for quick access in varmint control or self-defense situations for just $12.

Lucid brand optics have upscale features and durability, at a price point above junk optics but far less than those of the handful of producers whose optics are widely considered excellent. Wilson went into great detail about the use of foreign components by virtually all optics companies. Processes like lens coating are subject to so much regulation that domestic sourcing is impossible.Nevertheless, a Wyoming-based plant is in the works for some aspects of production. 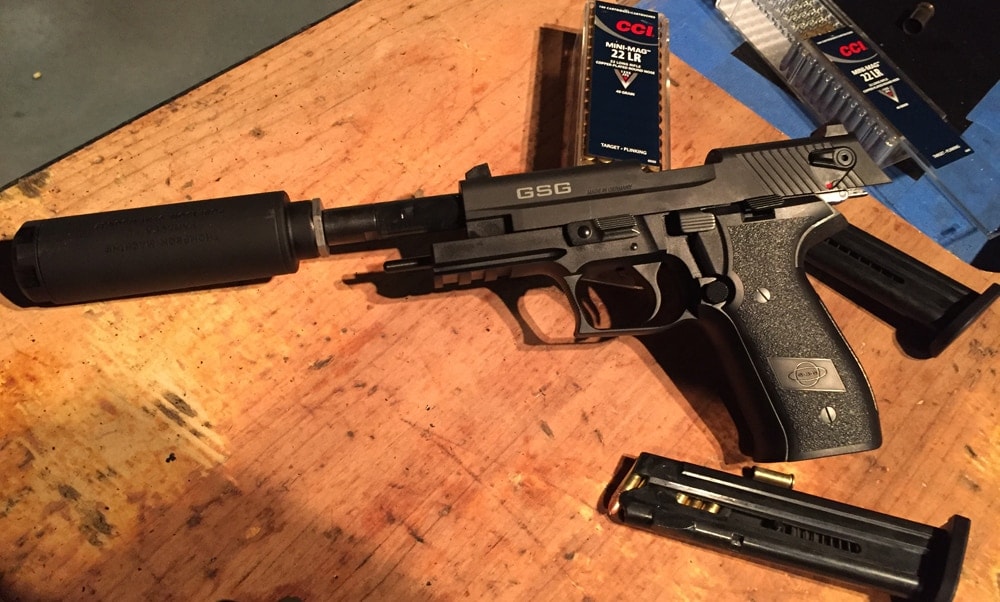 American Tactical, formerly American Tactical Imports, recently took on gun manufacturing as well as importation, and so dropped part of its name. The South Carolina-based company is known for their affordable polymer AR platform line, the Omni Hybrid Maxx. Planned expansions on that design have been sidelined due to demands for orders in other corners of their diverse catalog–which isn’t available in print, because of constant additions.

The company has taken over importation of the German Sporting Guns (GSG) Firefly, once branded the Sig Sauer Mosquito. Purchasing manager Joel Edwards proved through numerous stories that AT has taken a hands-on approach to the overseas manufacturing processes of their many imports, including this one. He says functional issues once associated with the Mosquito are now resolved. Firing the little .22 was a pleasure, as it cycled flawlessly. The initial double-action trigger pull, I’ll admit, was long, but the 10-round mag extended the fun. All models of the Firefly have an MSRP of $269.95. 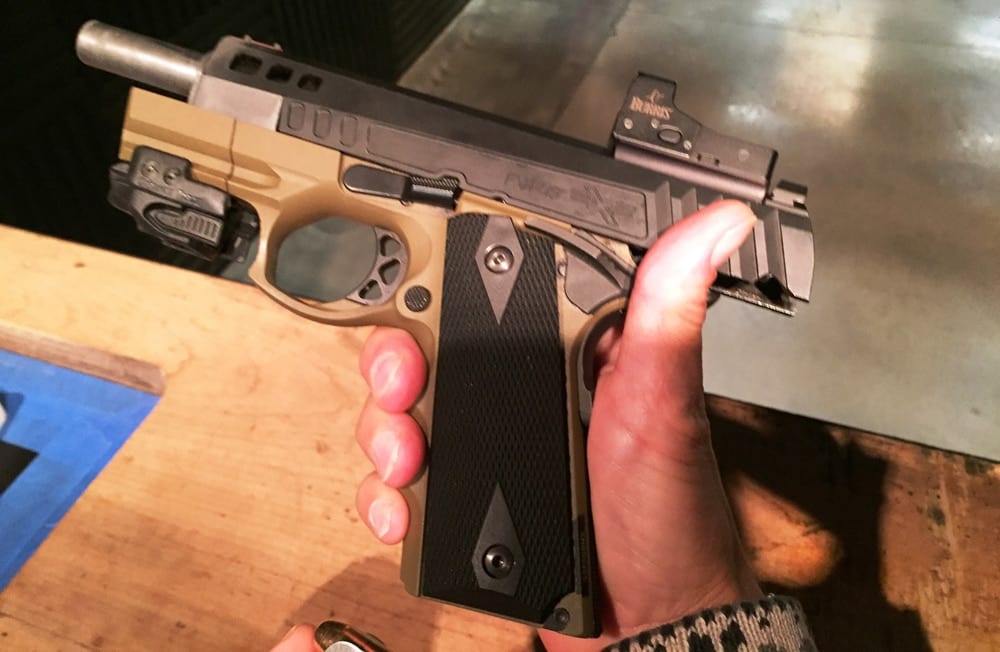 From AT’s American plant comes their new polymer-frame, commander style 1911. the Firepower Extreme Hybrid, also called the FXH-45. The radically light, 1.6-pound design features an accessory rail, a Glock-compatible sights, and full-length 7075 aluminum rails. The slide is nitride treated stainless steel. AT made sure this pistol is competitive with its all-steel counterparts by including a four-inch stainless match-grade barrel.

Tradition was honored again in the design as it takes standard 1911 grip panels and magazines. It has an ambi safety. Edwards said, “we wanted to enhance the 1911 and not just go for (lighter) weight.” A 9mm version is anticipated to be ready for sales early in 2017. 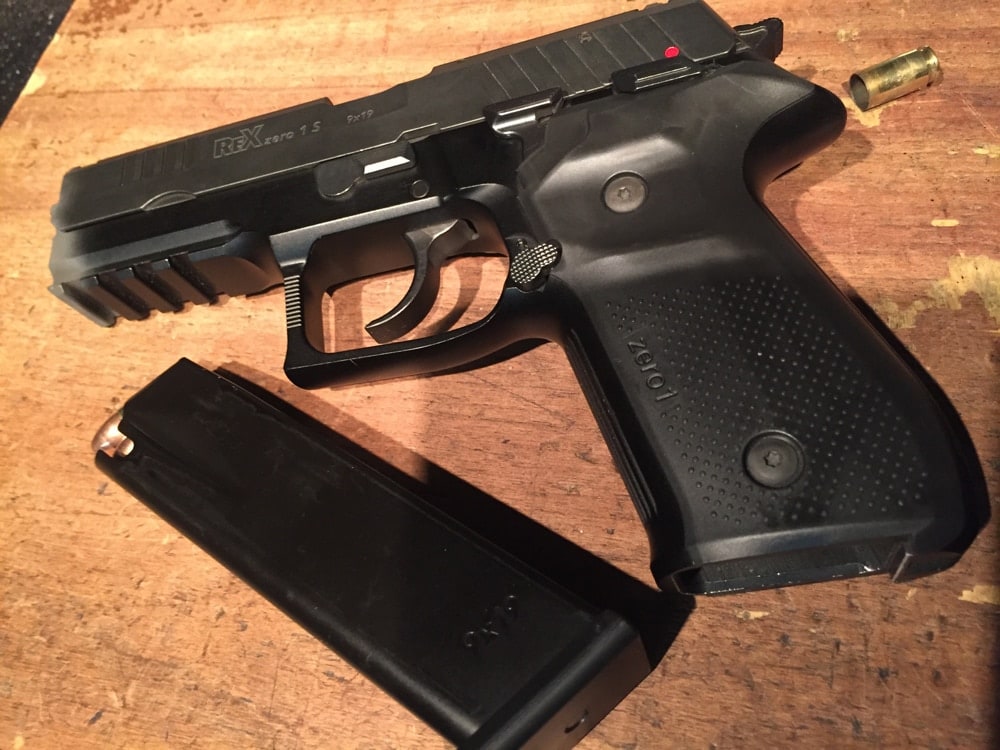 This Las Vegas-based company, Firearm Importers Manufacturers and Exporters, showed off a wide selection of imported hand and long guns. As with AT, it’s not easy to feature only two, but here they are:

The Slovenia-made Rex01S double/single action 9mm pistol is a design that will look familiar to fans of the Sig Sauer P22 series, though many differences exist, aside from the obvious one of caliber. The most notable are a T775 aluminum frame, and an easy takedown function, similar to many modern striker-fired pistols. The slide is solid bar stock.

Other updates include a 17-round Mec-Gar magazine, loaded chamber indicator, ambi safety and magazine release, accessory rail, and a manual safety in addition to the de-cocking lever. This allows the user to carry the pistol in cocked and locked condition, and avoid the long but very manageable DA trigger pull. Despite the aluminum frame, it’s on the heavy side at 32 ounces with an empty mag.

The Rex01S comes with an extremely detailed, beginner-friendly manual and a lifetime warranty to the original purchaser. Ryan Hicks of FIME Group said sales of the Rex01S “have exploded.” MSRP is $649. 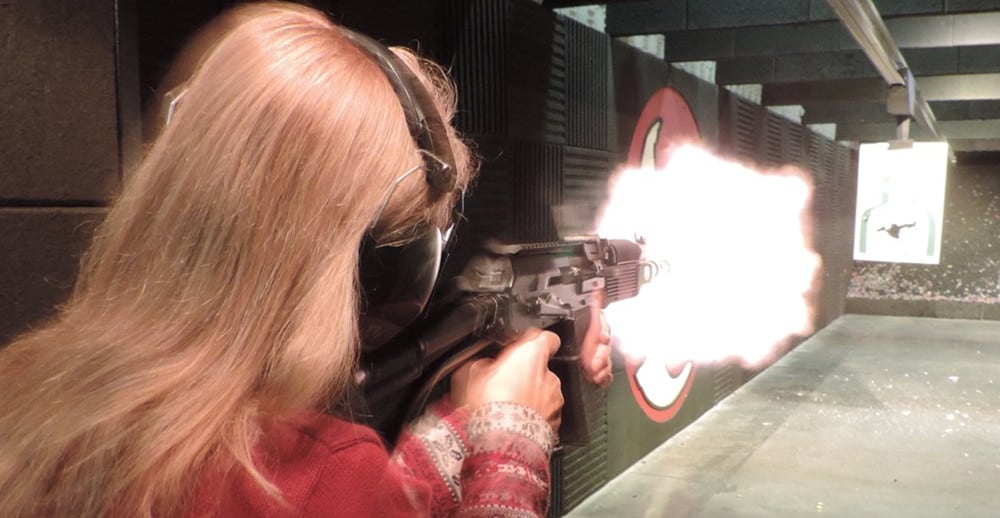 FIME Group also carries the Molot (MOE-lot) line of Russian rifles and shotguns. I had the chance to fire their VEPR 12 gauge semi-auto, which Hicks called an improvement over the Saiga design. Though similar in appearance to its Saiga predecessor, this shotgun won’t accommodate Saiga magazines. It comes standard with one five-round box mag, 19-inch barrel, and a fixed stock, for $749 MSRP. Other models are higher.

The Molot VEPR 12 gauge has serious firepower. It only took one round to inspire me to disconnect my cheek bone from its weld to the stock. The rest of the magazine was a thrill to shoot, with massive muzzle blast and severe recoil, but consistent accuracy at seven yards. Its compact size makes it ideal as a home defense firearm. 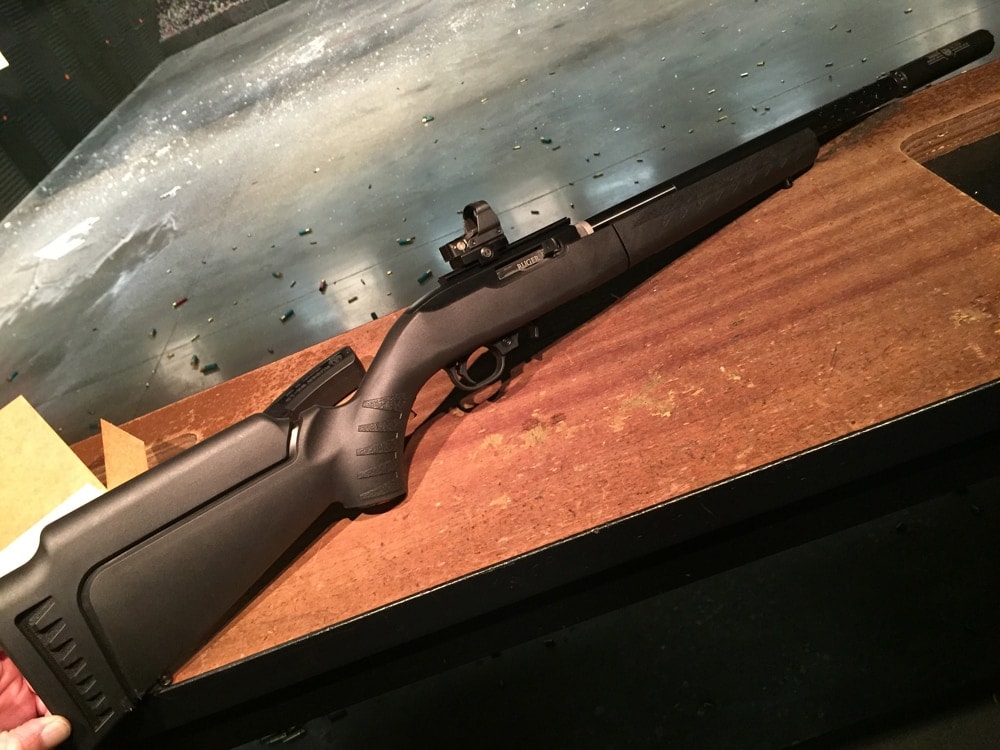 Ruger continues to roll out new and updated products this year. Representatives say that trend will continue. Writers were treated to a sneak peek and live fire of yet-to-be released models, as well as some new, available ones. Suffice to say there’s exciting news on the horizon for wheel gun fans.

The release of a Ruger-branded .22 suppressor has been overshadowed by news of other new releases, like the revamped LCP .380. That little shooter, as well as the new Mark IV, missed their rides to Orlando due to Hurricane Matthew.

I got to test the $449 MSRP can on the Ruger American 22LR rifle, a translation of the 10/22 that sports a stock with an adjustable comb to ensure a good cheek weld for those who mount an optic on this long-lived platform.

The threaded barrel has an aluminum heat shield, drilled in a pattern reminiscent of the trench gun, making it perfect for suppressed shooting.Both the suppressor and 10/22 performed well as writers emptied one 10-round mag after another. The American .22LR rifle with adjustable comb is selling in the low to mid $300s. 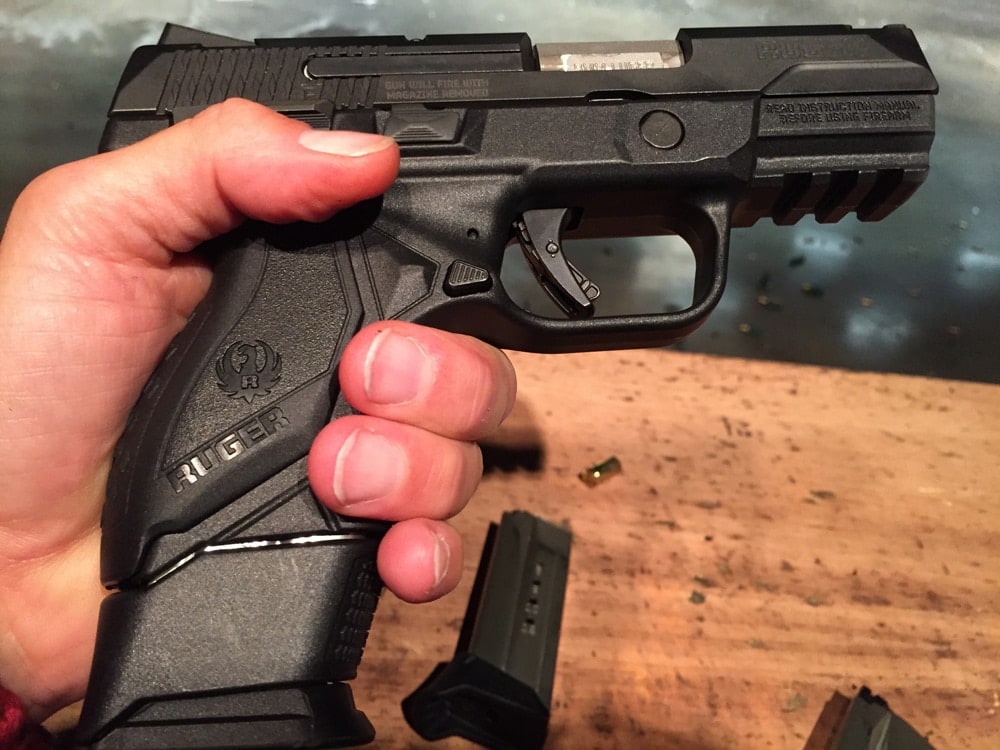 Another new actor in the Ruger lineup is the Ruger American Compact pistol. It’s three-quarters of an inch lower and shorter than its duty-size predecessor. The 9mm has 12+1 capacity and choice of three baseplates in its carry magazine. The regular American’s 17-round mag also fits.

Other user friendly features include three grip sizes which can be changed by the user, and ambidextrous construction. Purchasers may choose the Pro model, with no manual safety, or standard model with safety. Ruger reps say, “this model incorporates all our customer feedback on pistols for the last six years.” The Ruger American Compact MSRP is $579. 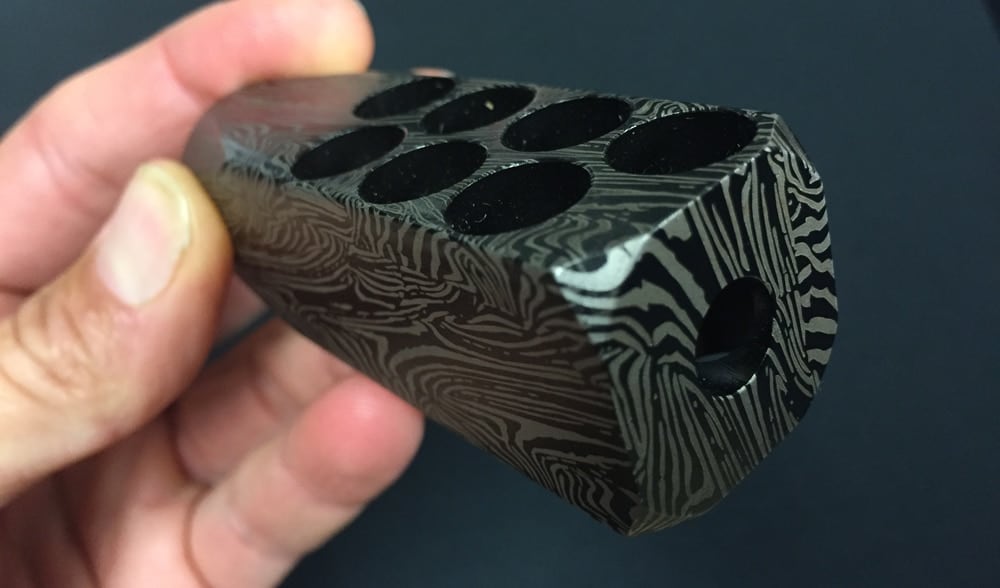 Huber has a novel approach to the timing of trigger press, and the relationship between eye and hand dominance. In an effort to realize the performance he envisioned, he first developed a ball-bearing trigger system for historic military rifles, such as the Mauser, 1903 Springfield, and Enfield. He purports that the trigger change, by itself, dramatically increases the precision of this class of rifles. These triggers sell for $95-$120 depending on model and finish.

For modern bolt-action centerfires such as the Remington 700 and its variants, some models of which are currently subject to a trigger recall, Huber has made a trigger, the pull weight of which can be customized to the user’s preference. Both one- and two-stage models are available, and are currently in use by professional long-range shooters. For $295, Huber says “this trigger will improve your shot timing, guaranteed.”

Another product from Huber Concepts that really works is their muzzle brake. With the three-inch long rectangular brake fastened to a .308, even at Gander Mountain’s indoor range the big rifle’s noise was reduced, and muzzle rise was negligible. Standing in the small insulated booth beside another shooter, however, I felt a shockwave of sorts as the energy that would’ve blown right out the muzzle was dissipated around it. It was easier to be behind than near the .308 during firing. 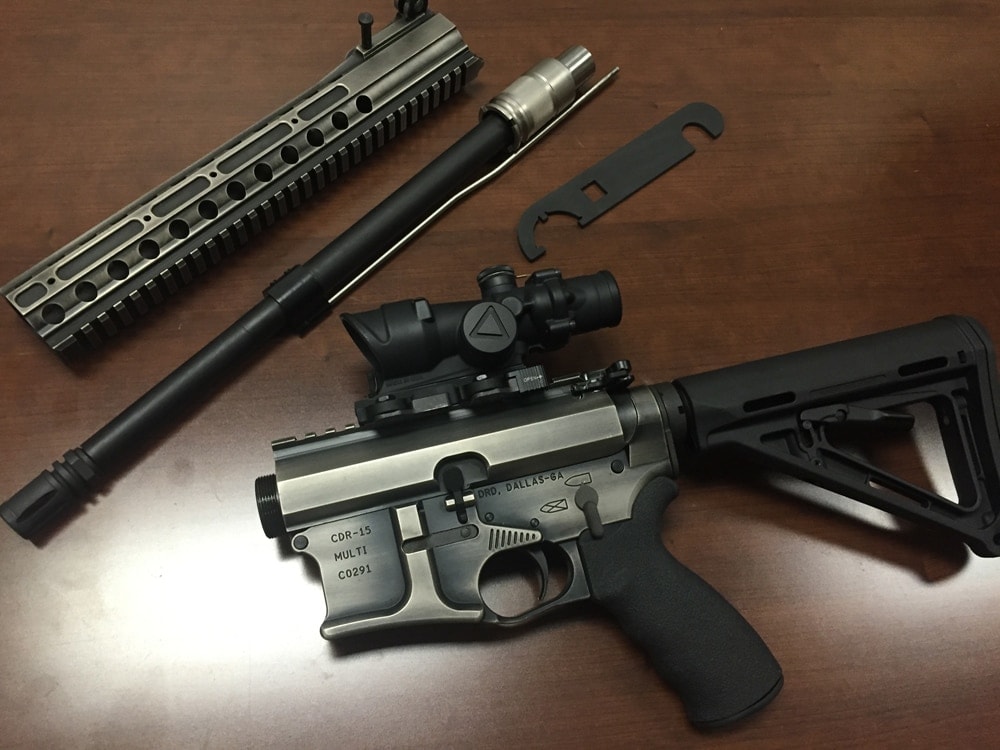 Designer Skip Patel of Las Vegas showed off his line of high-power takedown rifles, which are shipped with hard cases and custom foam cut-outs so a rifleman can carry not only a rifle, but also their sidearm and lots of extra mags, in what looks like office equipment.

Patel has a knack for creating high-end firearms, using some custom-made components as well as some modular ones to achieve a custom look along with high performance. He’s committed to using 100 percent U.S.-made parts in every firearm.

Attracting much attention at the show was the CDR-15, a 5.56 NATO AR, with upper and lower constructed of billet aluminum. This model had a combination of nickel boron under an anodized finish, hand rubbed for a rich, antiqued appearance that’s also abrasion-resistant. It’s called the “battle worn finish,” and adds about $310 to the $2,091 regular price of this rifle. Patel says no two are alike in appearance.