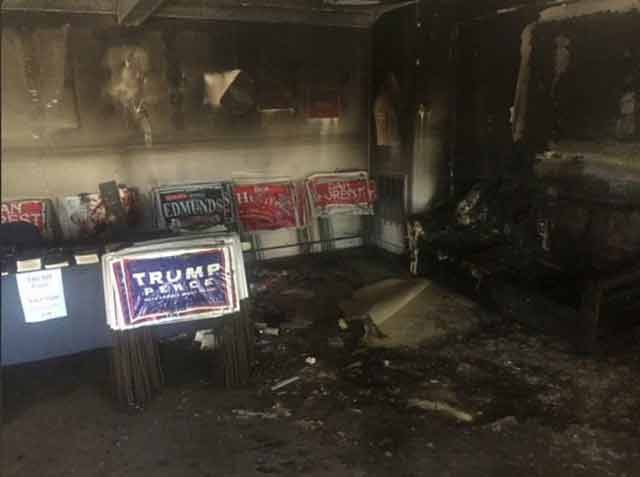 No one was injured, but the building was damaged. (Photo: North Carolina Republican Party)

What is being described as a bottle containing a flammable substance was thrown through a window of the office and set the building ablaze. Nearby, the words “Nazi Republicans leave town or else” along with a swastika were spray-painted on the side of a building. No one was injured, but the North Carolina Republican Party nonetheless called it a “vicious attack.”

“Whether you are Republican, Democrat, or Independent, all Americans should be outraged by this hate-filled and violent attack against our democracy,” said Dallas Woodhouse, executive director of the North Carolina Republican Party. “Whether the bomb was meant to kill, destroy property, or intimidate voters, everyone in this country should be free to express their political viewpoints without fear for their own safety.”

Woodhouse confirmed that GOP offices and events will have additional security from now until Election Day to ensure the safety of supporters, volunteers, and activists.

Republican presidential candidate Donald Trump reacted to news of the attack via Twitter by saying, “Animals representing Hillary Clinton and Dems in North Carolina just firebombed our office in Orange County because we are winning.”

Trump then followed up his accusations by reaffirming no one was injured.

“With you all the way, will never forget,” he added. “Now we have to win. Proud of you all!”

Likewise, Democratic presidential hopeful Hillary Clinton took a break from defending Planned Parenthood and attacking her opponent to express her thoughts about the crime.

“The attack on the Orange County HQ office is horrific and unacceptable,” Clinton said in a Twitter post. “Very grateful that everyone is safe.”

Woodhouse said the Republican Party would not be deterred by what he characterized as a “hate crime.” A Go Fund Me campaign has been set up to help raise money specifically for building repairs, but has thus far gotten off to a slow start with only about $1,000 of the $75,000 goal raised as of Sunday night.

The investigation is ongoing, and anyone with information about the crime is asked to contact the Hillsborough Police Department tip line at 919-732-3975.