Pennsylvania AG race one of sharp divide over gun policy 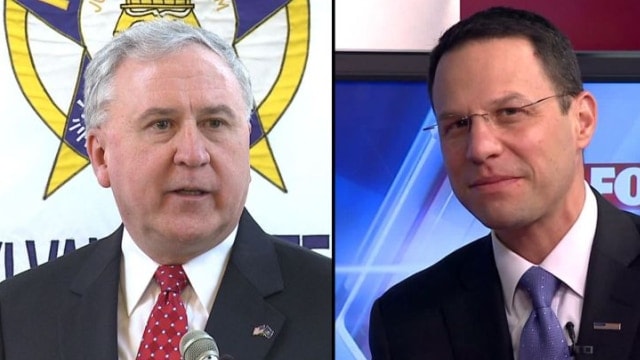 Replacing outgoing Attorney General Kathleen Kane — the first Democrat ever elected to the position and now on her way to jail on felony perjury charges — will be either fellow Democrat Montgomery County Commissioner Josh Shapiro or Republican state Sen. John C. Rafferty Jr. Both men are from the Pittsburgh area but come with opposing viewpoints on gun politics.

Shapiro, in an editorial penned earlier this year for The York Daily Record, promised to implement “model gun show procedures” to crack down on sales in parking lots as well as prosecute prohibited firearms purchasers who fail background checks to buy guns while planning to step up straw purchasing awareness.

Moving past that, he wants to review Pennsylvania’s concealed carry reciprocity agreements and sever those he finds do not mirror the state’s own guidelines for issuance. A similar move by Virginia Attorney General Mark Herring earlier this year sparked outrage among gun owners and conservative lawmakers there and was quickly rolled back.

Next on Shaprio’s list are expanded background checks to cover private sales of long guns. The state currently has a mandate that requires only checks on the private transfers of handguns.

Finally, he wants statewide lost or stolen gun requirements to give cover to municipalities who recently repealed local ordinances under now-stricken Act 192 and avoid having to reestablish them.

“I support the Second Amendment and law-abiding citizens’ rights to own firearms,” says Shapiro. “I also believe we can work together to strengthen our policies to reduce and prevent gun violence, prosecute criminals and make Pennsylvania safer for all our citizens.”

This has won him support from CeaseFire Pennsylvania who only spoke with Democratic candidates before making their endorsement. National gun control groups to include Everytown and Moms Demand Action also are throwing weight behind Shapiro. Former New York Mayor Michael Bloomberg has dropped at least $250,000 into the pot for the candidate, helping to push him to a 4-to-1 funding lead over his opponent.

These moms demand action on gun violence prevention and as Attorney General I'll do just that. Thanks for your advocacy @MomsDemand! pic.twitter.com/nMfbMKnE2r

As for Rafferty, the former Pennsylvania Deputy Attorney General points to his prosecutorial and legislative record to show he is tough on crime. He cites that he was instrumental in the passage of the Brad Fox Law that raises penalties for firearm straw purchasers. Fox was a police officer in Plymouth Township who was fatally shot by a man using a gun illegally purchased for him and to date several straw purchasing cases have been tried under the new mandate.

This is tempered with a “no-politics” pledge he has issued to enforce state law as written while working to combat Pennsylvania’s heroin problem, target child predators and increase school safety.

He is also a fan of strong state preemption laws, which would halt local gun control ordinances.

Rafferty is well-liked by gun rights groups including the National Rifle Association who have given Shapiro a “D” grade on Second Amendment issues while awarding the Republican an A-.

“John Rafferty, Jr. has a proven record of support for the Second Amendment and the rights of law-abiding citizens,” said Chris W. Cox, chair of the NRAs’ Political Victory Fund. “It is critical that Pennsylvania elects an attorney general who is willing to stand up to the extreme anti-gun agenda that’s being pushed by political elites like Barack Obama, Hillary Clinton and Michael Bloomberg.”

It will be up to Pennsylvania’s voters to decide on Nov. 8.