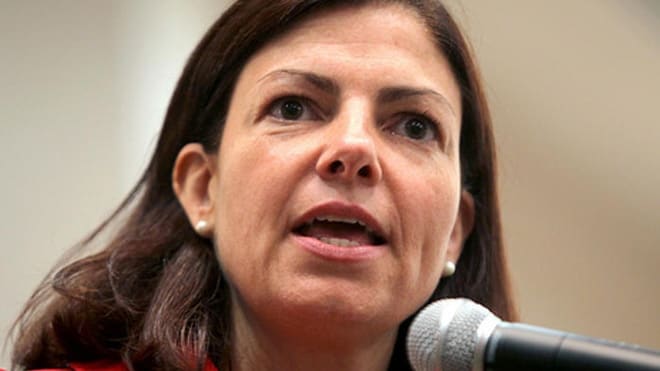 New Hampshire Sen. Kelly Ayotte has been targeted by anti-gun groups, which spent $2.5 million against her during the 2016 campaign. (Photo: NHPR)

Gun rights organizations have spent 14 times more on federal campaigns than gun control groups this election cycle, according to data collected by the Center for Responsive Politics.

Nearly all of the contributions targeting Ayotte came from Americans for Responsible Solutions, an organization formed by former Arizona Congresswoman Gabby Giffords and her husband astronaut Mark Kelly after the 2012 Sandy Hook massacre. Giffords survived a 2011 assassination attempt in Tucson where a gunman shot her at pointblank range and killed six other people.

The incumbent candidate Ayotte is running against New Hampshire’s Democratic Gov. Maggie Hassan and polls show the two are in a dead heat. A recent Suffolk University/Boston Globe Poll shows Ayotte ahead with 47 percent compared to Hassan’s 41 percent.

Ayotte has maintained support for Trump despite his recent disparaging remarks about women and other revelations coming to light that turned off other GOP leaders. However, New Hampshire may swing in Trump’s favor as polls show he’s trailing Clinton only by two percentage points.

A large chunk of the ARS Political Action Committee’s investment went toward TV advertisements knocking Ayotte for voting against legislation that would have expanded the federal background check system for gun purchases in 2013 and another earlier this year.

Yet, it was her 2013 vote that made her a target for gun control groups, which saw her as vulnerable since she was the only senator from the northeast to vote against the measure created in response to the murder of 20 first graders and six educators in Newtown, Connecticut. In the immediate aftermath of her vote, surveys showed 50 percent of voters saying they would be less likely to re-elect her and gun control groups have tried to maintain that sentiment.

Despite an A-rating by the National Rifle Association, records show the organization has not invested in Ayotte this campaign. Yet, the NRA, which aims to confirm a new pro-gun Supreme Court Justice in the near future, has invested heavily in a number of Republican Senate seats as well as putting Trump in the White House.

Everytown for Gun Safety, funded by former New York mayor and businessman Michael Bloomberg, spent $27,548 against Ayotte and another $46,410 against Trump. Although gun legislation has not been a key talking point for Republicans rallying their base, it has been for Democrats.

Confidence in the gun control candidate may explain spending in federal elections. Clinton has included a number of gun control measures — such as an Assault Weapons Ban and expanded background checks — as part of her platform and continued analysis of poll results show a Clinton victory as highly probable.

Still, gun politics at the federal level continue to idle, so Everytown has focused on passing legislation at the state level, said Everytown spokeswoman Erika Soto Lamb to Guns.com in an email.

“We’re doubling down on that approach this cycle by making significant investments in elections that will advance our state-focused strategy,” she said. “We’re heavily invested in the state ballot initiatives and in the remainder we are also making direct contributions to candidates and campaigns or running independent expenditure efforts in more than 20 states.”

Using their strategy, Everytown has expanded background checks at the state level in Colorado and Washington — the latter to the chagrin of pro-gun groups whose competing ballot initiative lost. Measures to expand background checks are on ballots for Maine and Nevada.

However, Soto-Lamb said they’re beginning to see minds changing for Republicans at both the state and federal level, and referenced Pennsylvania Sen. Pat Toomey, a Republican who co-wrote the expanded background check legislation with a Democrat in 2013.

“There has been a complete sea change on guns this cycle — candidates are running on gun safety because they know the people support it,” she said. “It’s a winning issue.”