48 shot over the weekend in Chicago; Shootings reach record-breaking numbers 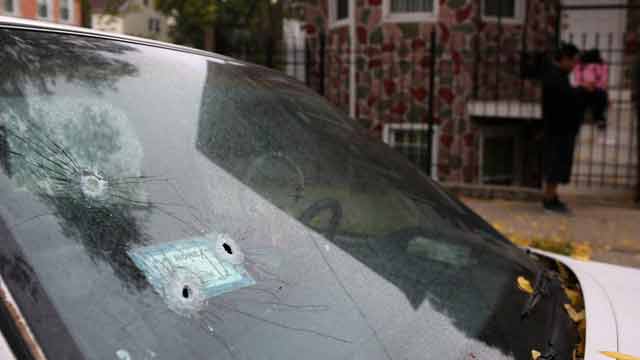 From Friday evening to Sunday night at least 40 people were wounded and another eight killed by gunfire in Chicago, once again pushing the city’s crime rates to record-breaking numbers.

In a single incident Friday around 8:15 p.m., a drive-by shooting left six wounded and one man dead. The victims were standing together on a city block when a black vehicle drove past and opened fire.

One male victim was shot in the arm, a female was shot in the foot, and another female was treated at the scene for a graze wound to her face. All of their injuries were determined to be non-life threatening. Additionally, three men were struck in the arms and legs and took themselves, along with 32-year-old Jeffrey Brinson, to a local hospital. The three are expected to survive, while Brinson, who was shot multiple times, was pronounced dead just 18 minutes after the shooting occurred.

Other victims ranged from teen to middle-aged, with the majority in their early 20s. At least two of the victims remain unidentified, according to the Chicago Tribune. The paper also noted that numbers of this caliber in a single weekend are typically seen during the warmer, summer months, not fall.

In spite ofresearchers’ claims that crime rates are at a 30-year low, Chicago’s crime rates continue to increase. In fact, in August, the city saw its >deadliest month in nearly 20 years. Meanwhile, minority voters who participated in a telephone survey earlier this year said that, despite recent high-profile cases, they still believe gun violence is a bigger issue than police brutality.