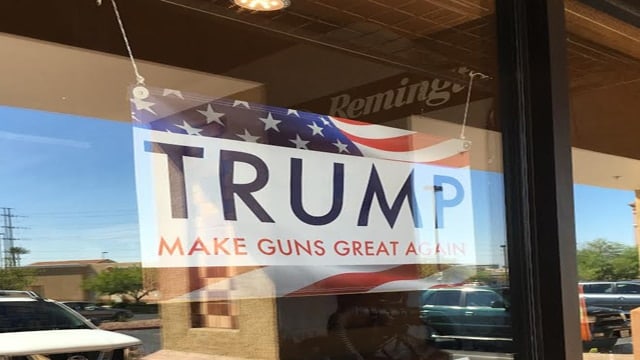 Cameron Hopkins said Monday he knows his armory’s newspaper ad may ruffle a few feathers, but the Las Vegas gun shop owner stands by his claim — a Hillary Clinton presidency will skyrocket the price of firearms.

Hopkins drew national attention after an advertisement for his store, Westside Armory, ran in the Las-Vegas Review Journal over the weekend. The ad promotes a “Pre-Hillary Sale,” featuring a Smith & Wesson M&P Sport II rifle retailing for $699.

“Don’t wait! Prices will skyrocket after Crooked Hillary gets in!” the ad’s text warns readers.

“It’s a little bit of tongue and cheek because the whole thing has kind of gotten ridiculous,” Hopkins said. “This whole political season is so outrageous. That’s the best word I can use. Everything about this election has been outrageous.”

Hopkins, a former magazine editor and consultant who’s spent four decades working in all corners of the gun industry, opened Westside Armory two years ago on Durango Drive, about 11 miles off the Vegas strip. He said it’s generally his policy, as a business owner, to avoid political entanglements, though he makes an exception when it comes to guns.

A banner hangs in the store’s front window reading “Trump: Make Guns Great Again.” Hopkins said the sign is so popular, customers routinely ask if they can buy it.

“We are a single issue voter you might say and the only issue we care about is guns,” he said. “That’s why we use the term ‘Crooked Hillary.’ That’s why we have the Trump banners. That’s why we are an NRA recruiter.”

But not everyone seems thrilled with Hopkins’s approach. Critics bash him for profiting off of fear and politics — and he doesn’t deny the hype around potential gun control measures under a Clinton administration isn’t good for business.

“I would say that’s entirely valid,” he said. “We absolutely recognize that when Hillary Clinton is the next president, gun prices are going to go up. We want to make everyone aware that there will be much more gun control and there will be a panic wave, just like when Obama was elected in 2008 and 2012. It’s just simple economics.”

It’s not just the gun control crowd crying foul over Hopkins’s ad, either. Nevada Carry, a gun rights group that describes its mission as “dispelling the myths about Nevada firearm laws and open and concealed carry,” said Monday the advertisement “was in poor taste,” given Hopkins’s troubled relationship with the state’s firearm community.

“I believe that Mr. Hopkins is more concerned with selling guns than gun rights,” said C.G. Gates, editor of the Nevada Carry blog. “It’s a business, so that’s fine, but then my rhetorical question to the gun-owning public is why should we support someone whose motives appear suspect when guns are a very hot topic right now? He’s capitalizing on fear of gun control/confiscation, but at the same time, seemed to have supported gun control. The apparent incongruity is what is offensive and the ad was in poor taste.”

Gates first learned of Hopkins eight months ago after a Bloomberg Businessweek article featuring the Westside Armory made waves in the gun rights community for promoting what advocates believe is a thinly-veiled push for universal background check laws in Nevada.

Nevada voters will decide on election day whether to approve Question 1 — a ballot measure requiring background checks for the majority of private sales and transfers.

Former New York City Mayor Michael Bloomberg finances the campaign to get Question 1 approved in Nevada. So far, he has donated nearly $4 million to Nevadans for Background Checks, the state surrogate of Bloomberg’s gun control group, Everytown for Gun Safety.

Gun rights groups, led by the National Rifle Association, view the referendum as nothing more than a back-door attempt to chip away at Second Amendment rights and establish a statewide gun registry.

So when Bloomberg Businessweek reporter Paul Barrett, author of “Glock: The Rise of America’s Gun,” spent three days in February behind the counter observing the day-to-day happenings of Westside Armory, tensions over background check laws in Nevada were already high.

In the ensuing article, published Feb. 17, Barrett wrote many federally-licensed firearms dealers, including Hopkins, “would have no objection to background checks for all gun transfers” — and it was this, Gates said, that ignited controversy within Nevada’s gun-owning community.

Gates discusses the article in a blog post for NevadaCarry.org in which he wrote Hopkins emailed him clarifying he didn’t support universal background checks and his views were misrepresented — though only after the negative attention threatened his business’s reputation, Gates said.

“Combined with this ad, his past actions and attitude, and what customers have reported, this is why I posted what I did,” he said. “He seemed more concerned with his business image rather than telling people the truth about his beliefs.”

“It’s kind of a non-sequitur,” he said. “I don’t understand the jump. We are advertising the AR-15 and the tag line is prices will skyrocket once Hillary gets in. That’s neither for or against the Second Amendment. That’s just economics.”