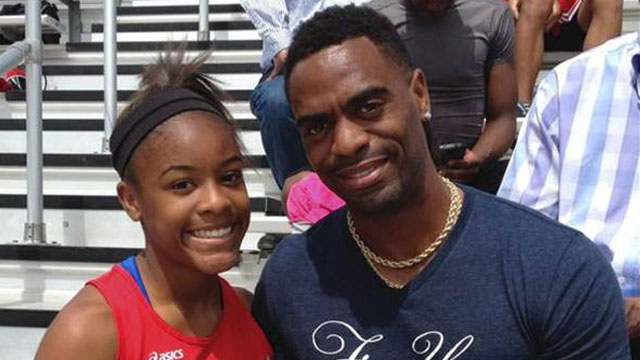 Trinity Gay, 15, was killed Sunday in the parking lot of a restaurant in Lexington, Kentucky. She was the daughter of three time track Olympian Tyson Gay. (Photo: Mark Maloney / Lexington Herald-Leader)

Trinity Gay, the daughter of Olympian Tyson Gay, was 15 years old when she died on Sunday from a stray bullet that hit her outside a restaurant in Lexington, Kentucky. Now, as her family mourns, they’re praying for the families of the people accused of pulling the trigger.

“The family appreciates the outpouring of support during the loss of our beautiful Trinity,” Gay’s family said in a statement released Monday. “She will be truly missed by all. She touched so many people on so many different levels. We ask for your continued prayers and privacy during this difficult time.”

“We are a family that believes in love and forgiveness. We are also asking for prayers for the 3 men accused and their families during what is also a difficult time for them,” they said.

According to Lexington Police, Gay was shot outside the Cook Out restaurant just before 4 a.m. Sunday. People in two cars were firing at each other before driving off. Trinity Gay was hit by the stray bullet as she stood in the parking lot. Her friends got her in a car and drove her to the hospital, where she later died.

“I don’t want to read in the paper next week about another senseless killing,” he said. “It has to stop.”

Gay said his daughter was always happy, and that she’d have wanted others to protect each other, no matter what. She was a track star at Lexington High School. People hung pairs of track spikes from a fence at Monday night’s vigil.