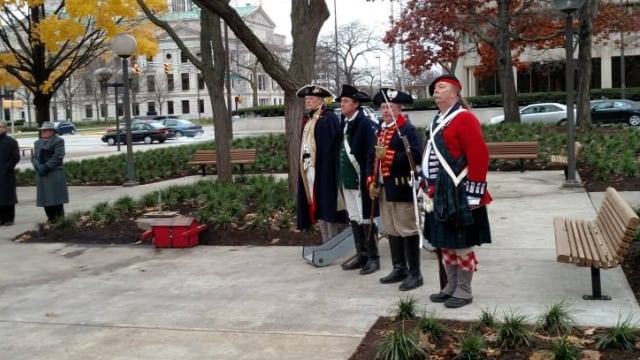 Currently the only civilian-owned guns allowed in Fort Wayne’s 90 public parks are replicas carried by reenactors such as these for the re-dedication of the statue of Gen. “Mad” Anthony Wayne in Freimann Square. (Photo: Fort Wayne Parks and Recreation)

In a 6-3 vote Tuesday, the Fort Wayne Common Council agreed to strike language from the city’s code that kept legal guns out of local parks.

The debate over changing the local ordinance in the second largest city in Indiana began with a proposal from Republican 4th District Councilman Jason Arp to the nine-member council earlier this month. Arp told the local ABC affiliate it was an effort to get the city to comply with Indiana’s 2011 firearms preemption law that forbids local regulation of guns.

He also made a case for self-defense with a gun, which were banned from the city’s 90 public parks.

“When you look at the statistics, rape has gone down substantially because of firearms,” said Arp. “A firearm actually allows a 100-pound woman to defend herself against a 200-pound assailant. I’ve got children — little girls — and when they grow up I want them to be able to defend themselves and do so in public places.”

Arp’s simple two-page repealer, Resolution 16-10-6, was added to the top of the Oct. 18 agenda and passed with an easy two-thirds majority. Should it be approved in a final vote later this month, those with a valid concealed carry permit will be able to bring their handgun to area parks. Items such as fireworks, BB guns, slingshots, pea shooters, blow guns and paint ball guns are still banned as is hunting, fishing or trapping, though any could be allowed with permission from the city’s parks department providing it doesn’t break state law.

Not all were in favor of the move.

“Our award winning parks are safe, and my constituents do not want to see individuals roaming them with weapons,” said 5th District City Councilman Geoff Paddock, a Democrat who also serves as director of a local park. “Firearms in parks should only be in the possession of well-trained law enforcement officers. This is not an issue about gun rights. This is an issue about public safety.”

At a meeting of the Board of Park Commissioners last week, WANE reported that Board Vice President Pamela Kelly went on the record saying there had been a lot of feedback from the public, none of it in favor of the proposal.

The measure must come up for a final vote on Oct. 24.