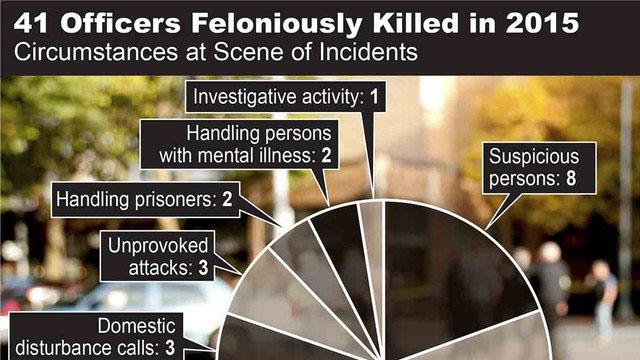 A new report released Tuesday by the FBI shows that fewer officers were killed in 2015 compared to the year before, but that downward trend is ticking back up in 2016.

According to the Law Enforcement Officers Killed and Assaulted report, 86 officers were killed in the line-of-duty in 2015. That’s 10 less than the year before.

Next year’s LEOKA report will show a different story though, according to Christopher Nicholas, a section chief at the FBI’s Criminal Justice Information Services Division. In a weekly FBI podcast, Nicholas detailed this year’s numbers.

Forty-one officers were killed feloniously in criminal acts last year in the United States, 10 less than in 2014, according to the 2015 LEOKA report.

Most of the felonious deaths, 19 of them, occurred in the south; nine happened in the West; five in the Midwest; four in the Northeast; and four in Puerto Rico.

Of the 45 officers killed accidentally, 29 of them were killed in car accidents. Others died in accidental shootings, an aircraft accident, and a fall.

Additionally, 1,336 federal law enforcement officers were assaulted in 2015. One of them was killed, and 172 others were reported injured.