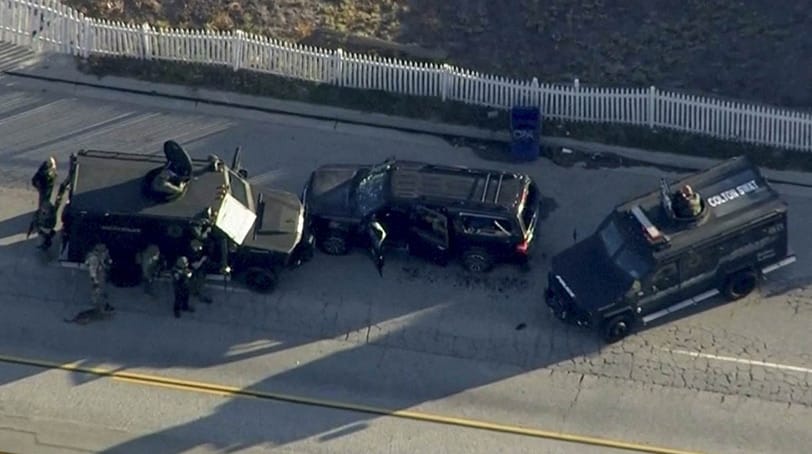 It’s been almost a year since a deadly terror attack claimed the lives of 14 people in San Bernardino, Calif., and ended in a police shootout with both suspects dead, but memories of the incident resurfaced several times during a convention held by the largest law enforcement group in San Diego this week.

Fontana officer Frank Losch was part of the siege that took place after the shootout with terror suspects Sayeed Farouk and Tashfeen Malik on Dec. 2, 2015. He drove the armored vehicle, a six-ton “Rook,” which safely placed a team of fellow SWAT officers close enough to the vehicle to confirm Malik was dead.

Also on hand was the armored vehicle Losch used during the San Bernardino police response. He stood in front of it as he recounted the incident to Guns.com. 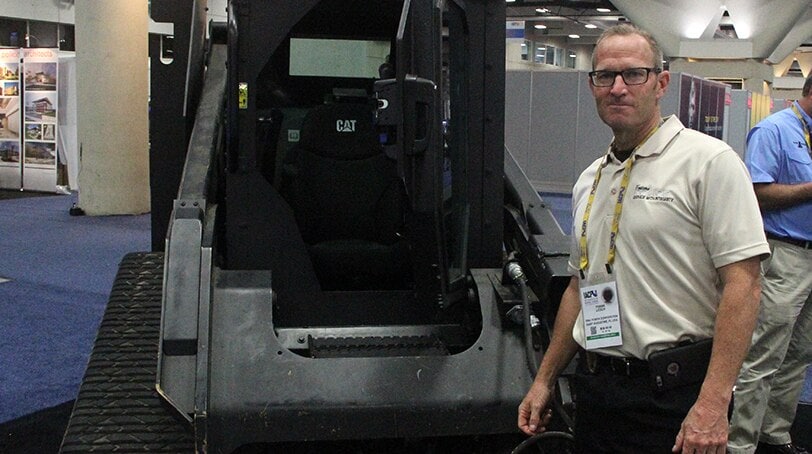 “I was assigned as the Rook operator, so when we initially responded to the IRC Center, I was on standby outside the building and then when they spotted the vehicle with the terror suspects and the shooting occurred I drove the Rook over to the area and then when they determined that the female terrorist was still inside the vehicle it was undetermined if she was dead or not or if she was playing possum behind the back seat,” Losch said.

Two BearCats, or what essentially look like armored SUVs, were at the forward and aft of the suspect’s vehicle blocking a potential escape, but officers didn’t have a clear view inside.

“Instead of making their approach on foot to the car to see if she was dead or not inside, they waited for me to show up and put a team on the platform and I was able to drive it within inches of the driver side of the vehicle where she was in the back seat,” Losch said.

As the Rook approached the suspects’ vehicle, officers stood on its armored deployment platform peering through four 5-by-9-inch gun ports cut out of a floor-to-roof front shield.

“As soon as we rolled up to the car and were inches away, they could determine that she had passed away from her injuries,” Losch said. “We used a rubbish hook to grab a hold of her and basically drag her out of the car and put her on the ground.”

Losch is part of the Inland Valley SWAT Regional Team, which is made up of the Fontana, Rialto and Colton police departments. He said having heavy equipment like the Rook is a “game changer” in being able to protect officers from deadly threats.

“With all the ballistic protection, I’m comfortable sitting in there, ballistic-protected, and the team on this platform, right here itself can protect a team of four or a team of six,” Losch said. “In that situation there, if she would have been in the back seat, but not dead, waiting for officers to approach, they were fully protected with this and I was able to get them within three inches of the car and if a gun battle would have ensued, they would have been able to fire back at her through the gun ports and she wouldn’t have been unable to harm them because they had the ballistic protection of the platform.”

Despite Losch’s success with the heavy machinery, Ring Power Tactical Solutions says it’s having trouble selling the equipment to agencies because of increased scrutiny over state and local police departments acquiring military-type equipment.

President Barack Obama announced in May of last year that these types of transfers of military surplus items would no longer be allowed.

“We’ve seen how militarized gear can sometimes give people a feeling like there’s an occupying force, as opposed to a force that’s part of the community that’s protecting them and serving them,” Obama said during a speech in Camden, New Jersey. “It can alienate and intimidate local residents, and send the wrong message.”

Nowhere was that more evident than in the law enforcement response to the fatal police shooting of Michael Brown in Ferguson, Missouri, the year before. Officers responded to community protests wearing full riot gear and camouflage uniforms, some mounted atop armored vehicles with heavy weaponry.

Vehicles with tank tracks — like The Rook — were covered under the president’s order. Because of this, it’s made it more difficult for police departments to acquire this kind of machinery, said Wm. K. Conklin, president of Life Safety Systems, a company that provides counter-terrorism equipment, vehicles and consultation to law enforcement.

“We’ve had to restructure a leasing program so that police departments can afford to buy this equipment,” Conklin told Guns.com.

The Rook standard package costs about $300,000 and comes with the vehicle, which is built on a Caterpillar chassis, and several extras, including the same type of armored platform with protective wall used in the San Bernardino shootout.