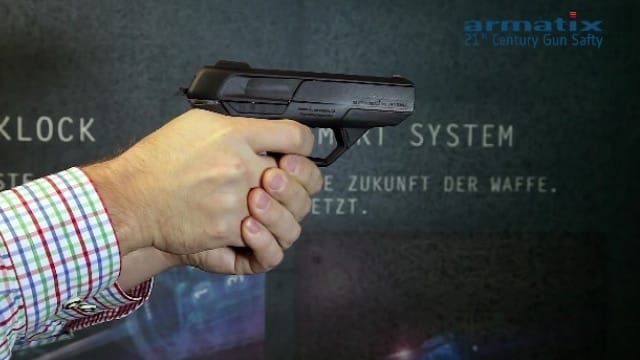 While specs on the new Armatix iP9 are not available, the company also plans to bring back their tanked iP1 .22LR, above, to the market they first tried to break into in 2014. (Photo: Armatix)

After a rocky start, the niche German firearms company specializing in personalized handguns is bringing a 9mm version and a vow they are not aiming “to replace conventional guns.”

The company’s first offering burst on to the scene in early 2014 with the iP1, a $1,300 .22LR that needed to pair to an RFID-equipped wrist watch to be able to fire. Armatix convinced firearms dealers in California and Maryland to offer the gun on a limited basis but both stores quickly recoiled after backlash from the Second Amendment community without selling any.

Although officials in states with sticky smart gun mandates held the iP1 would not trigger their dormant law, the company was left with 5,000 unsold high-dollar pistols and began to shift course towards a potentially more acceptable 9mm version marketed to police.

Then in 2015, news came that the small 30-employee company parted ways with Ernst Mauch, the engineer who helped found the thus-far unsuccessful venture and entered into Chapter 11-style corporate restructuring even as their chief executive in the U.S.  publicly gaffed on firearms safety and the National Rifle Association tested the gun and found it lacking.

The only video referencing the iP1 on the company’s website besides a 2014 backgrounder is how to understand the low battery warning lights.

Now, as reported by Computer World this week, Armatix’s current CEO and President Wolfgang Tweraser is ready to move forward with their iP9 9mm gun which will be available in mid-2017 along with the legacy iP1.

With an MSRP of $1,365, Tweraser says his company is not aiming to compete with makers of conventional firearms that are considerably cheaper, arguing the gun is something of a novel design that would spark curiosity among some of the country’s millions of gun enthusiasts.

“When Tesla came on the market, I never heard them say, ‘Let’s replace the BMWs and Mercedes and only have electric cars,'” Tweraser said. “They offered a superior product that was more expensive and people said… ‘Yes, it’s more expensive, but I would like to have it.'”

He also contends that, removing politics and mandates from the issue, there would be a market for those interested in safety.

“Our iP1 and the next one — the iP9 — are new technology with a lot of safety features meant to protect gun owners, gun users, children, teenagers, etc,” says Tweraser. “We are not here to replace [conventional guns]. If people would take that approach, there would be far fewer political issues.”

In the meantime, Tweraser, who has long been involved in a Florida-based holding company, has apparently been trying to recruit brand ambassadors through social media.

Dwayne Johnson we would like to have u as spokesperson for gun safety which is a huge issue – pls check out https://t.co/2EIy8AW6wu

Dwayne Wade Dear Sir, my condolences to the loss of ur family member. I would like to talk to u about gun safety. https://t.co/AO8VM6NOsX