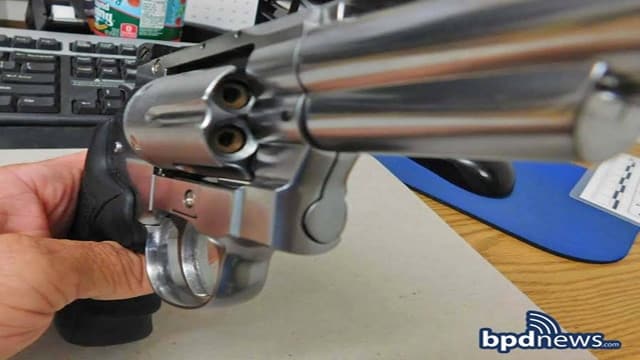 Boston officials banned replica guns 11 months ago, but city police still regularly confiscate the weapons — such as the fake revolver recovered from a fleeing suspect Monday.

Officers found the replica in a backpack taken from a 20-year-old Damien Davis, who was apprehended in Dorchester after he abandoned a stolen scooter and ran from police.

The department later posted photos of the fake gun on its social media channels to “remind” residents “why replicas are banned” in the city.

“The officers who made the arrest clearly displayed extraordinary levels of restraint and discipline while affecting the arrest,” the department said. “The guns might be fake but consequences most certainly have the potential to be lethal. Upon inspecting the firearm taken off the suspect who dumped a stolen motor scooter and ran from police, officers were amazed at how real it looked, felt and functioned.”

“Thankfully, this kid never pointed this gun at any of our officers because, if he had, this could’ve gone real bad,” said one of the unidentified responding officers.

Davis has been charged with receiving stolen property and trespassing.

A city-wide ban on the replicas went into effect in November 2015, according to The Boston Globe. Police can seize the weapons, but getting caught in possession of one is not a crime.

“Replica guns have become a big issue for us,” Boston Police Commissioner William B. Evans told the newspaper. “We all too often encounter young people who are carrying these fake guns and even though they are fake, the public and the police don’t know they are.”

Replica gun bans have gained popularity in recent months as a string of police-involved shootings of teenagers carrying the realistic-looking weapons makes headline across the country.