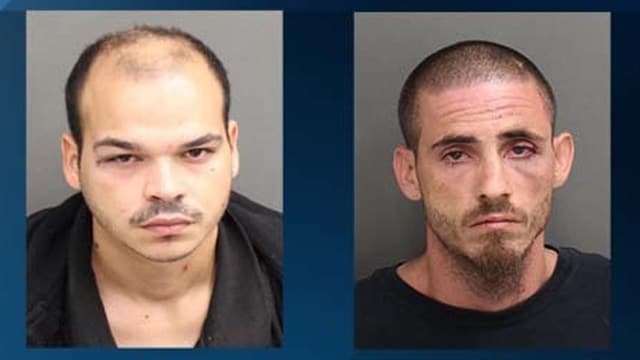 Two men who broke into an Orange County, Florida, business Sunday were arrested, but so were the shop owner and two others after they allegedly held the suspects and tortured them for more than two hours before calling the police.

Bike shop owner Robert Antley said following a rash of recent break-ins he had started sleeping in his shop at night. So early Sunday morning when Jose Gonzalez, 27, and Michael Eller, 28, broke into the shop, they were met with a big surprise, the Palm Beach Post reported.

The suspects, who openly admitted to authorities that they broke into the shop, said they were confronted by Antley, who was armed with a gun. But instead of calling 911, Antley held them at gunpoint and made the duo strip down to their underwear, then face a wall. After that, Antley allegedly beat the two suspects and jabbed the gun into their sides while threatening to kill them both.

This apparently went on for at least an hour, according to Eller, before Antely’s brother, Joshua, and his girlfriend, Kathryn Pellicio, came to the shop. At that point, Eller and Gonzalez were forced into a bathroom in the back of the shop and beaten for more than an hour.

Eventually, Antley called 911. He claimed he called the police as soon as his brother arrived. Antley said he would have called sooner, but his cell phone battery was dead and he was unable to make phone calls from the landline because Eller and Gonzalez cut the phone lines before they broke into the shop. Authorities, however, found discrepancies in Antley’s story.

In the end, all five – the two suspects, the shop owner, his brother and his girlfriend – were all arrested on various charges.

Legal analyst Bill Sheaffer told the newspaper that while property owners have the right to protect themselves and their property, he argues the actions of Antley appeared to be neither reasonable or lawful.