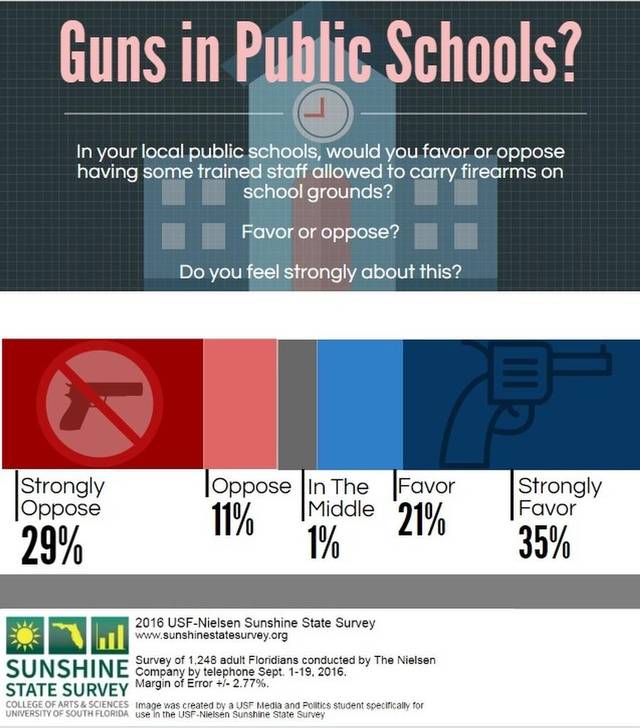 The results of the 2016 USF-Nielsen Sunshine State Survey, released in increments over the last month by the University of South Florida College of Arts and Sciences, indicate 35 percent of the 1,248 people surveyed “strongly favor” the idea and another 21 percent said they would just “favor” such a proposal.

Strong supporters tended to fit into one of the following groups: white, working-age, male, college graduates, affluent and living in Orlando or northern Florida.

The opposition was comprised mostly of females, the elderly, African-Americans, lower-income households, those with lower levels of education and Miami/Ft. Lauderdale residents, according to The Sunshine State News.

“There’s consensus among survey respondents on four issues – requiring elementary schools to give students a 20-minute recess daily, imposing heavier fines on those who text while driving, prohibiting use of government funds to renovate privately-owned sports facilities, and withdrawing support of university study abroad programs in countries with known terrorist activity,” she said. “But Floridians are more divided on other issues related to individual behavior including gun use training, smoking, sports gambling and transportation issues such as road tolls and ways to improve traffic flows.”

The survey methodology sticks to the same tradition it’s followed since 1999 — researchers called a randomized sample of 1,248 Florida residents age 18 and older between Sept. 1 and Sept. 19.

Businesses, cell phones and Do Not Call registered telephone numbers were not included in the sample, the university said.

Survey results are weighted to balance out underrepresented demographic categories and were applied according to region, gender, age group and race/ethnicity. There is a 2.77 percent margin of error, according to the university press release.

It’s not the only gun issue survey researchers pressed residents about either. In results released Oct. 10, 49 percent of those questioned supported a ban on semi-automatic “assault weapons” compared to just 37 percent who said such a law “would be moving the state in the wrong direction.”

“Generational, racial, and gender divides are the deepest on immigration, human trafficking, and gun ownership,” she said.