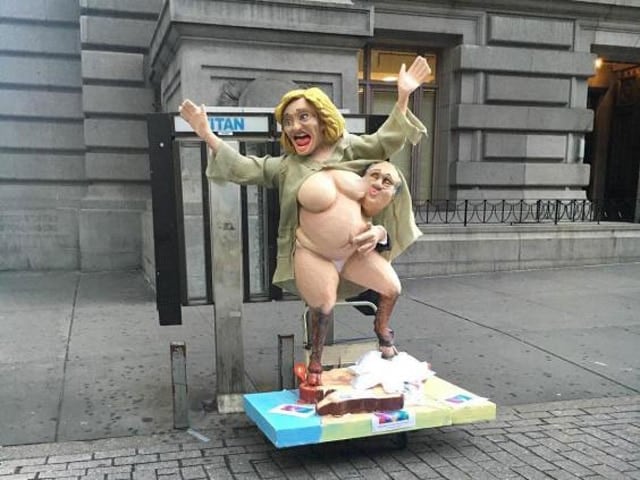 A not-so-flattering statue of Hillary Clinton erected in Manhattan early Tuesday morning reeled in a group of angry people, with one woman attempting to destroy it – and partially succeeding – before police were called on the scene.

The statue, which went up around 6 a.m. but was a thing of the past by 7:30 a.m., depicted a half-naked Hillary, complete with cloven-hoofed legs, and a Wall Street banker peeking out from behind her. In front of the pair appeared to be a pile of deleted emails, along with a map of Benghazi and blood on Hillary’s feet.

The artist and the hands-on protester became involved in a heated exchange, with the artist saying he was just trying to preserve his work, while the vocal woman wasn’t having it.

“This is my workplace. I have to look at this?” queried the angry woman, who was later determined to be an employee at the National Museum of the American Indian.

A spokesman for the museum noted that the woman was “acting as a private citizen who was personally offended by the statue” but the museum was “currently evaluating the situation with the employee.”