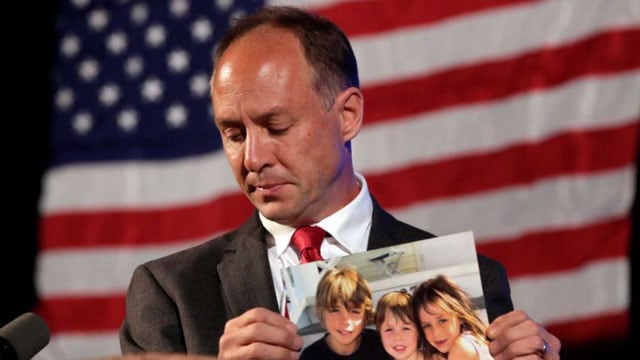 The father of a young boy who was killed in the 2012 Sandy Hook shooting says it’s “disgusting” that Donald Trump would align himself with radio host Alex Jones, a man who calls Sandy Hook a “giant hoax.”

Mark Barden’s 7-year-old son Daniel was killed on Dec. 14, 2012, in the massacre that also claimed the lives of 19 other first-graders and six educators.

“Sandy Hook is a synthetic, completely fake, with actors, in my view … manufactured. I couldn’t believe it at first,” said Jones on his radio show in January 2015. “I knew they had actors there, clearly, but I thought they killed some real kids. And it just shows how bold they are that they clearly used actors.”

None of these claims by Jones have been substantiated.

In December, Trump made an appearance on Jones’ radio show. “Your reputation is amazing,” said Trump of Jones. “I will not let you down.”

Jones claims he’s advising Donald Trump, but it’s unclear whether Trump considers that to be the case.

Still, Barden finds Trump’s alignment with Jones to be disgusting. “The Republican presidential nominee of the United States is being advised by a delusional sociopath. It speaks for itself,” Barden told The Daily Beast. “What else can you say about that? It’s disgusting.”

Barden’s comments come as a new documentary is being released about the mass shooting at Sandy Hook. “Newtown” takes a look at the aftermath of the tragedy.