Suspected stalker shot after forcing his way into woman’s home 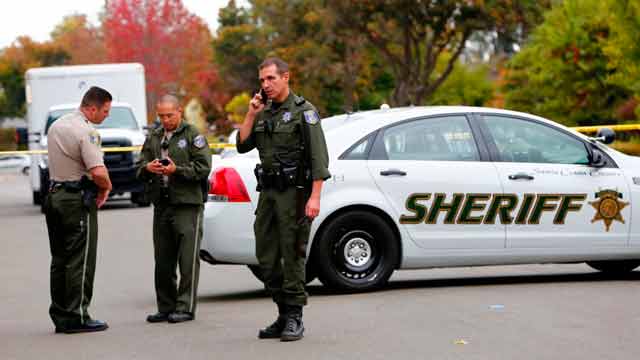 The woman was still on the phone with the 911 dispatcher when the suspect broke through the door. (Photo: The Mercury News)

A man accused of stalking a woman through several states is recovering from multiple gunshot wounds after he forced his way into a home in Los Altos Hills, California, Friday where the woman had been staying.

William Brady III, 43, made his way from Georgia and showed up at the California home Friday morning around 11 a.m. The woman noticed Brady, who appeared to be armed with a handgun, as he approached the house and she immediately called 911, The Mercury News reported.

But before officers could arrive on the scene, Brady forced his way into the home and opened fire on the woman and two other residents. One of the woman’s relatives, however, armed himself as well and returned fire, striking Brady multiple times. Brady then fled from the scene.

After being advised of an active shooter situation, local authorities responded to the call along with the Emergency Response Team, which is similar to SWAT, and an armored vehicle borrowed from a nearby police department. Law enforcement set up a perimeter around the home and surrounding area, and Brady was located soon thereafter. He was transported for medical treatment while in police custody.

Officers recovered the handgun carried by Brady and he now faces attempted murder and other charges.

No one in the home was injured and the relative who shot Brady is not expected to face any charges, as it appears he acted in self-defense, according to a law enforcement official.

Reports indicate the woman previously sought a restraining order while still in Georgia, where both she and the suspect are from, but it’s unclear if that order was issued. However, since the shooting, Santa Clara County has issued emergency protective orders for the woman as well as those residing in the home where she is currently staying.