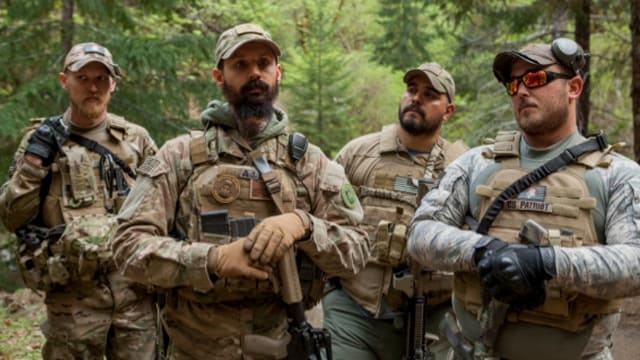 Members of the Oath Keepers patrol the Sugar Pine mine near Grants Pass, Oregon, in 2015. (Photo: Shawn Records via PRA)

Right-wing militia groups have grown steadily since the 2008 election of President Barack Obama and they continue to grow, according to a new report released this week.

The left-leaning Political Research Associates published “Up in Arms: A Guide to Oregon’s Patriot Movement” during a presidential election season that’s seen Republican nominee Donald Trump appeal to such right-wing groups while Democrat Hillary Clinton has been the subject of ire for those same groups.

The report says Oregon has one of the most developed militia movements in the country and it details the rise of the movement, including events and groups that have developed in the state in recent years.

The Patriot movement came about in Oregon and elsewhere in the wake of the 1990’s militia movement. At the core of their beliefs is the idea that the federal government threatens their freedoms.

“These groups are often armed and advocate defying federal laws they think are unconstitutional,” the report says, adding militias employ an inside/outside strategy as some members work to change things from within the government, while those on the outside undermine the system.

Groups detailed in the report include the Oath Keepers, the Three Percenters, and the Constitutional Sheriffs and Peace Officers Association, a group that believes county sheriffs have the ultimate say as to what is constitutional and what shall be enforced.

“Very few people realize that the Sheriff has the legitimate authority to prevent federal agents from entering the county—or the power to throw them out once they are there,” says the CSPOA, according to the report.

The Oath Keepers and the CSPOA actively encourage sheriffs to engage in “nullification,” or the refusal to enforce gun control laws.

A CSPOA list includes the names of 21 sheriffs who vowed to “uphold the Constitution” in Oregon and “support the constitutional second amendment rights of citizens.”

In a summary of the report, the researchers explained that militia will go even further. “The Patriot movement further undermines democracy by creating its own private policing bodies and faux-judicial and executive government branches—all of which bypass existing government entities and attempt to create antidemocratic structures controlled by their political movement,” it says.

The report concludes with strategies for people to stand up to militias in their communities. “When the so-called Patriot movement comes to rural Oregon, we at Rural Organizing Project work with communities on the frontlines to defend our communities’ right to self-determination,” it says.

The report comes as a jury deliberates in the trial of six men and one woman, all accused of illegally occupying Oregon’s Malheur National Wildlife Refuge for 41 days earlier this year. The group was led by Ammon and Ryan Bundy, the sons of Nevada rancher Cliven Bundy, a man who was involved in a 2014 standoff with federal agents.