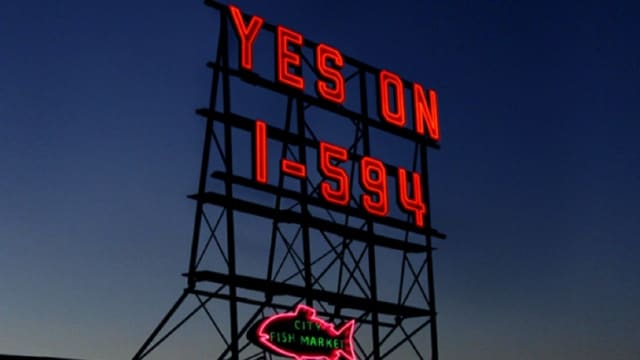 Initiative 594 passed with 59 percent of the vote in 2014, pushed in large part by voters in the Seattle-Tacoma area. (Photo: Everytown)

A lengthy, controversial and at times confusing $10 million universal background check ballot initiative passed by voters in 2014 is seeing its first use in court.

The 18-page Initiative 594, fronted by the Alliance for Gun Responsibility and backed by funds from national gun control groups and billionaire philanthropists, navigated its way to victory at the polls and further wins as it shrugged off both legal challenges and legislative changes.

Now, despite open non-compliance in some instances and uncertainly over just what it covers in others, the 2-year old law is seeing its inaugural use by prosecutors.

Mark A. Mercado of Oak Harbor has been charged with unlawful transfer of a firearm – a Phoenix Arms HP22 handgun — that was used in the murder of a 17-year-old two days later, KUOW reported.

Investigators say Mercado sold the gun in a private purchase to David Nunez without getting a background check done through licensed gun dealer first. Nunez, who was 19 at the time of the sale and unable to buy a handgun under federal law due to his age, is now serving 25 years for his role in the murder.

If convicted of the gross misdemeanor, Mercado could see up to a year in jail and a $5,000 fine.

The group who backed I-594 — and this election cycle is fronting another ballot measure — argues the prosecution shows the law is effective.

“The purpose background checks is to make sure that guns aren’t easily obtained by dangerous people,” Joanna Paul, communications director for the Alliance for Gun Responsibility, told Guns.com Friday.

“In Washington, we know that at least 100 prohibited purchasers haven’t been able to buy guns as a direct result of Initiative 594,” she continued. “The seller in this case acted in a dangerous, and now illegal way, by selling a firearm without a background check. Unfortunately that decision resulted in tragedy. The police now have a tool to prosecute that seller, and hopefully deter future illegal sales.”

An investigation by KING5 in March, based on public records requests, found that 50 gun sales between private individuals had been denied in the 14 months since the expanded background checks law went into effect — and none were prosecuted.

KIRO radio host Jason Rantz editorialized this week that the lack of prosecution of I-594 offenses is proof the anti-gun measure was oversold and misleading.

“Am I to believe only one bad guy aimed to purchase a gun without a background check in the last two years?” he asked. “If that’s the case, passing this law was hardly as urgent as proponents made it sound. But did the law suddenly stop the transfer of guns to bad guys? Probably not.”

Second Amendment advocates contend the law was flawed from the beginning and that the sale between Mercado and Nunez would have been illegal under federal guidelines even without I-594.

“This proves what we said all along,” Alan Gottlieb, chair of the Bellevue-based Citizens Committee for the Right to Keep and Bear Arms, told Guns.com. “The intent of the law was not to fight crime but to fight gun ownership. It did not stop this murder and has had no effect after two years on the books.”