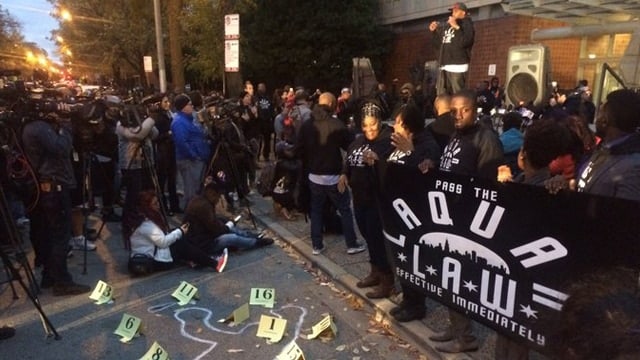 Chicago Police officer Jason Van Dyke was charged with first-degree murder in November 2015, just hours before a judge ordered the release of a dashcam video that shows Van Dyke shooting McDonald 16 times on Oct. 20, 2014. McDonald was holding a knife, but was walking away from police when Van Dyke opened fire.

The timing of the charges and the release of the video had activists and community leaders claiming Mayor Rahm Emanuel and Cook County State’s Attorney Anita Alvarez colluded to delay charges so Emanuel could get re-elected.

As protestors filled the streets in the days and weeks that followed, “16 shots and a cover up” became the popular refrain.

More than 300 people were outside Chicago Police headquarters Thursday, all of them demanding the passage of Illinois House Bill 6616, the Laquan McDonald Act. The proposed law would set up “a procedure for an election to recall the Mayor of Chicago, an alderman of the City of Chicago, and the Cook County State’s Attorney.” It would take effect immediately.

Protestors also rallied at City Hall, as well as the site where McDonald was shot, in the 4100 block of South Pulaski. They said if HB6616 doesn’t pass the Illinois Legislature, they will shut down the Mag Mile, a popular shopping destination for tourists, on Black Friday.

Chicago activist and hip-hop artist Che “Rhymefest” Smith told protestors Thursday that Chicago has to be one.

In a statement, Emanuel said, “We will continue working together across the city to build a brighter future by restoring trust between residents and our officers and implementing the reforms necessary to prevent this from happening again.”

Calloway, who organized Thursday’s rally, ended the event by releasing 600 balloons, one for each person killed in Chicago this year.