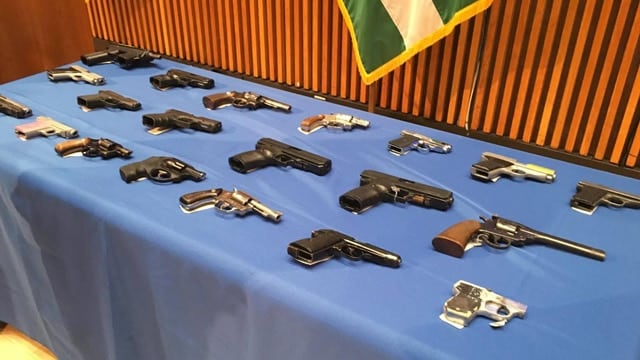 An investigation into a gun-smuggling operation running firearms from South Carolina to New York City resulted in the arrest of 19 people – three for running the guns and another 16 for a bank scheme which likely provided the funds to buy the firearms.

Colin “Rum” Toney, 27, his girlfriend, Dedra Shantel Wheeler, 21, along with Donte Smith, 25, were arrested on gun and conspiracy charges and could face up to 25 years in prison, the New York Police Department announced in a press release Friday.

Toney, who has ties to the Bloods, is accused of leading the operation. During the 15-month investigation, dubbed “Operation Rumrunner,” the guns were purchased in South Carolina and moved to Chinatown via cars and buses, according to Acting Brooklyn District Attorney Eric Gonzalez. In September, Toney sold 40 guns to undercover investigators in Brooklyn and Manhattan.

New York Police Commissioner James O’Neill said had it not been for the hard work of those involved in the investigation, those guns would be on the streets today.

Authorities pointed to the operation as an example of gun traffickers using the so-called “Iron Pipeline,” exploiting lax gun laws in the South to bring firearms for resale into other states where gun laws are much more strict, such as New York.

But the gun running investigation also revealed a bank scheme which netted about $60,000 in illegal cash. The operation consisted of essentially opening bank accounts using phony checks and wire frauds. The money was then withdrawn before any red flags were raised.

“That’s important because often, the money that’s used in credit card fraud and bank fraud is used to further more gang activity,” explained Gonzalez, who took over the case for former District Attorney Ken Thompson, who died just two weeks ago following a battle with cancer.

Gonzalez noted that targeting the illegal flow of guns into the city was a high priority for Thompson and one where Gonzalez will continue to place great importance.

“I think we’re going to go a long way in pushing violence down. So I look forward to the relationship,” O’Neill said of working with Gonzalez.