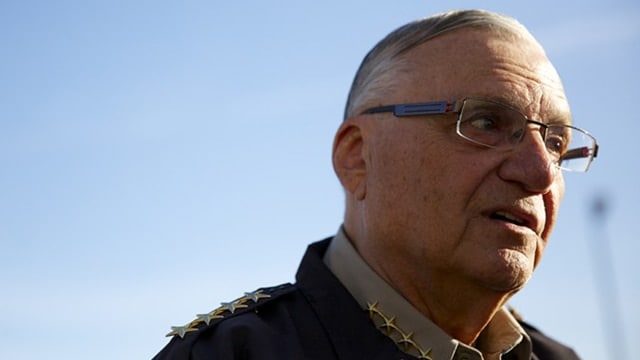 Longtime Maricopa County Sheriff Joe Arpaio is facing a tough re-election bid as a recent poll put him 15 points behind his Democratic challenger.

The 84-year-old Arpaio has been the sheriff of Arizona’s most populous county for 23 years, serving six terms since 1993. A poll by The Arizona Republic/Morrison/Cronkite News has challenger Paul Penzone with 45.9 percent of support of those surveyed and 31.1 percent for Arpaio.

Arpaio campaign manager Chad Willems called The Arizona Republic poll “a complete joke,” in a statement to Reuters. “The numbers in no way accurately depict the electorate of Maricopa County, Arizona,” he said, adding the campaign’s survey has Arpaio leading by 7.5 points.

The controversial lawman has championed himself as a tough, no-nonsense sheriff — moving inmates into a tent city and making them wear pink underwear. He’s also stumped for Donald Trump, praising the candidate’s border policies.

On Saturday, a group against Arpaio threw him a retirement party. About 500 people rallied outside the Maricopa County Sheriff’s Office in an effort to mobilize votes against him.

Natalie Offiah travelled from Mississippi for the party. “Some of the same sentiments that (Arpaio) holds against immigrant communities — it’s sentiments that people hold across the nation and then use those ideas and those emotions to then oppress groups of people who don’t deserve to be treated that way,” Offiah told ABC15 in Phoenix.