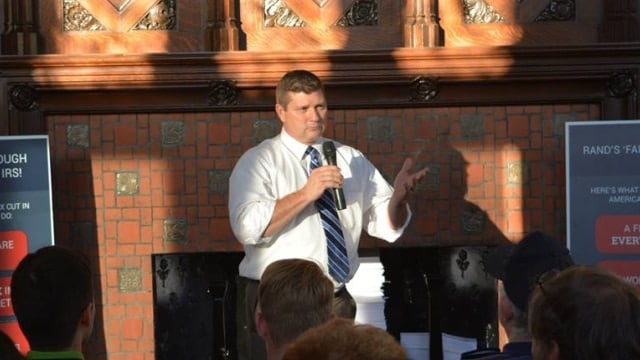 After championing successive rounds of permitless concealed carry bills in the state legislature, a New Hampshire state senator is being slammed by a national gun control group.

Representing the 12th District in the New Hampshire Senate since 2014 is Republican Kevin Avard, who defeated Democrat incumbent Peggy Gilmour by a razor-thin 300 votes at the polls to earn his seat. Since then, he has been a strong advocate of gun rights in a state that already has unlicensed open carry and some of the lowest crime statistics in the nation.

Avard was a senate co-sponsor of HB 582 this year as well as SB 116 last year which would have codified the right in New Hampshire to carry a concealed handgun without a permit. Gov. Maggie Hassan, a Democrat who cites support for the Second Amendment while publicly promising gun control groups her veto on gun rights legislation, scuttled both bills in turn.

Avard’s position, which is unpaid other than a $200 stipend every two years, has been the target of big spending from out of state.

According to data from the New Hampshire Secretary of State’s office, former New York Mayor Michael Bloomberg’s Everytown group has spent $132,685 in the state against local candidates this cycle on robocalls, online campaigns and mailers — almost all aimed at Avard.

In comparison, the NRA’s Political Victory Fund is showing no contributions to state candidates though they have endorsed the Republican incumbent, giving him an “A” rating while his opponent, former state Sen. Peggy Gilmour, has a lower “C” rating.

Gilmour has raised $88,961 directly for her campaign in addition to the money spent by Everytown.

When advised of the amount being spent to defeat him, Avard told the New Hampshire Union Leader, “I must be doing something right.”

In an editorial, the Union Leader slammed what it classify as an attempt by out of state interests to buy a local senate seat.

“Bloomberg’s attempts to meddle in New Hampshire elections are just the kind of constitutionally protected political speech that liberals want to ban, except when such efforts are aimed at Republicans,” noted the Union Leader. “We await the outrage from Democrats over Bloomberg spending such an absurd amount on one state Senate race.”

The race for Avard’s seat is not the only race where gun control advocates are spending big in New Hampshire this election cycle. Hassan is eschewing her digs in the governor’s mansion in a bid to move to Washington by taking Republican U.S. Sen. Kelly Ayotte’s seat. Though Ayotte has out-raised Hassan by large degree, the governor has picked up more than $3.5 million from national gun control PACs and, as reported by Real Clear Politics’ poll aggregator, is running neck and neck with just two weeks until the election.

New Hampshire voters will head to the polls Nov. 8.